Previous article :
With VSL, the largest wind farm in Spain is built with post-tensioned concrete towers
Next article :
In Cuba, two new hotels open their doors 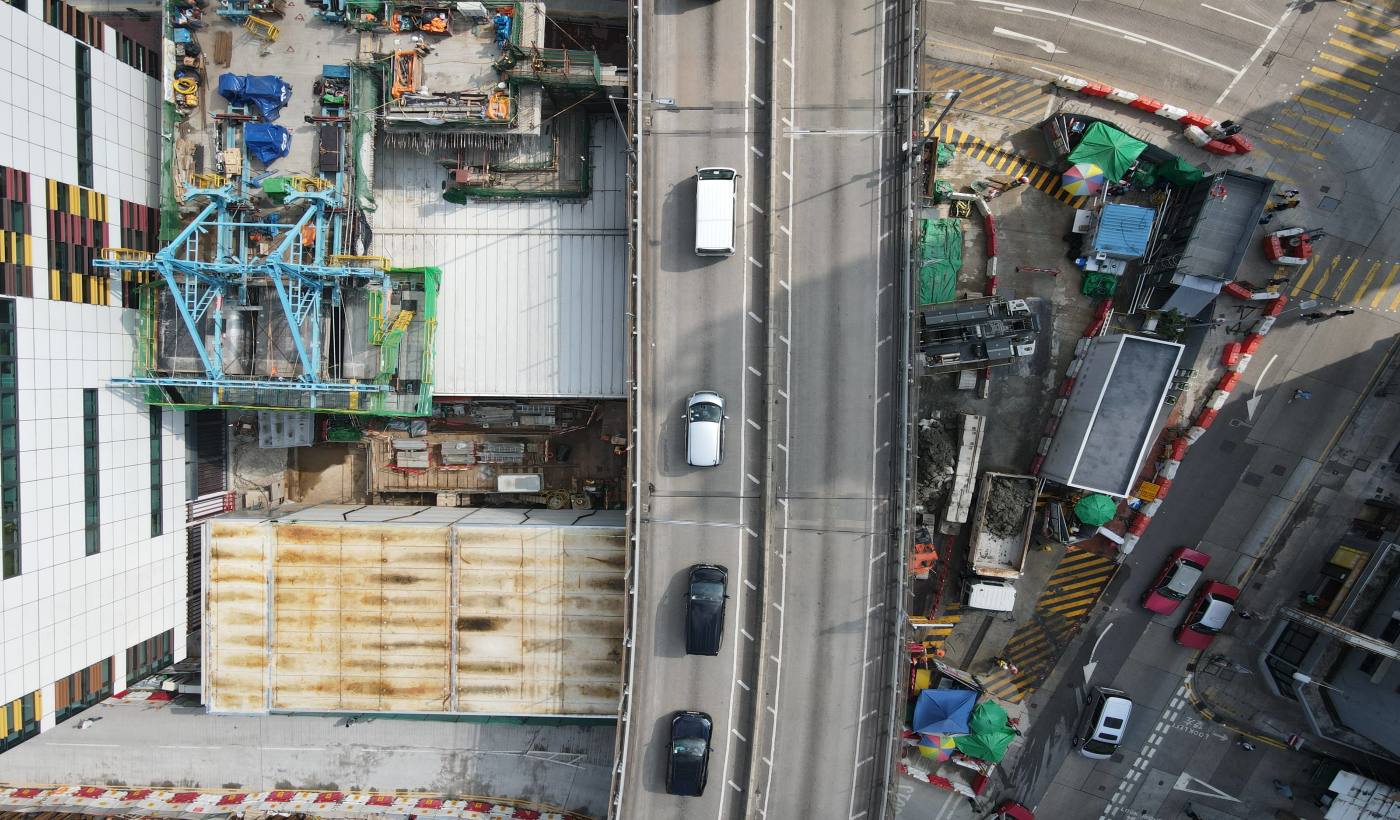 In 2019, Bouygues Travaux Publics has been awarded contracts for two road tunnels in the Kowloon Peninsula, Trunk Road T2 and Central Kowloon Route, by the Hong Kong government. Those are key projects of the strategic road network in the region, the Route 6. Let’s dive into these worksites!

A longstanding presence in Hong Kong

Confronted with the saturation of its road networks, the Hong Kong government is permanently investing in its transport infrastructures to relieve traffic congestion for its population. Through its expertise in tunnels and underground structures, Bouygues Travaux Publics has asserted itself as one of the city’s historical partners where such projects are concerned. In particular, several worksites have been completed for the Highways Department, including the East Tsing Yi viaduct in 2008 and the Hong Kong-Zhuhai-Macao bridge in 2018.

Signed in July and November 2019, the Central Kowloon Route (CKR) tunnel and the Trunk Road T2 testify to the client’s ongoing trust in the expertise of Bouygues Travaux Publics and Dragages Hong Kong teams. Even more so since these worksites are part of a major project for the city.

A strategic road, a positive impact

The population density in Kowloon is particularly high. With its 2.1 million inhabitants, this 47 km2 area is the most populous urban area in Hong Kong. The Route 6, planned for completion in 2025, is a strategic road network that will provide an east-west express link between West Kowloon and Tseung Kwan O. Relieving the congestion problem on the existing east-west roads, it will indeed have a direct and positive impact on the population. The Route 6 will also provide the essential transport infrastructure to support new development projects in the region.

Upon commissioning of the entire Route 6, travel time during peak hours between Tseung Kwan O Town Centre and Yau Ma Tei will be substantially shortened from about 65 minutes now to 12 minutes.

Did you know?
When completed in 2025, the Central Kowloon Route will offer an alternative express route for the traffic to bypass the congested road network in Central Kowloon. Concretely, the driving time from West Kowloon to Kowloon Bay will be shortened from 30 minutes to around 5 minutes!

As for Trunk Road T2, it will connect central and east Kowloon. The journey time between Kai Tak and Lam Tin will be reduced from the current 15 minutes to three minutes, as vehicles will then be able to use the newly completed subsea tunnel.

The Central Kowloon Route has to cross the Kowloon peninsula from Yau Ma Tei to Kai Tak. With a total length of 4.7 kilometres, the contract includes a 3.9-km-long tunnel, of which the Bouygues Travaux Publics’ team is building a 2.8-km, dual three-lane section between Yau Ma Tei and Ma Tau Kok. In addition to this twin-tube tunnel, the contract also makes provision for the construction of 31 branches, two access tunnels and a ventilation shaft.

The Central Tunnel of the CKR will pass adjacent to four Mass Transit Railway lines. This requires meticulous project management in order to ensure zero interruption to the activities at ground level and the MTR service. The teams also have to navigate right under the heart of Kowloon. This compact site brings other challenges. Especially when carrying out drill & blast, an advanced double deck explosive charging technique will be adopted at sensitive areas near the MTR tunnels and building piles to minimise disturbance to the surroundings.

The complex geology is another challenge to face. The range of ground conditions is various, from hard rock to weak soils. The tunnel alignment crosses seven faults, including three major ones, and the rock cover is thin at both ends. That’s another reason why excavation methods must be tailored to limit vibrations and subsidence in these areas.

The teams recently achieved a new milestone. In January, the TBM Nebula completed its journey, connecting Ho Man Tin and Ma Tau Kok access shaft. The journey has been a great technical challenge, as the TBM passed underneath the MTR Tuen Ma Line, with a clearance less than 20 metres. 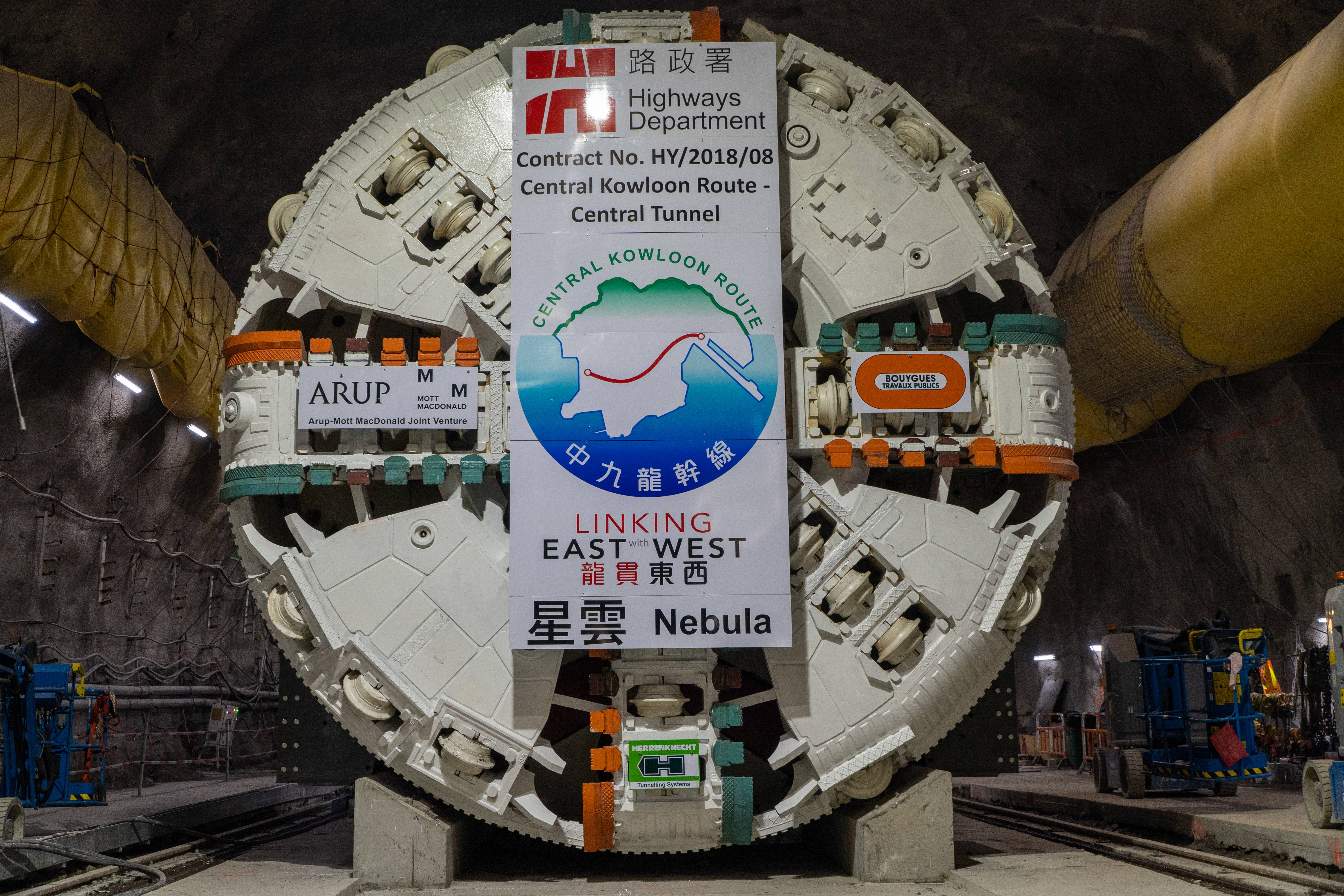 The TBM of the Central Kowloon Route – Central Tunnel was already launched in July 2021, and the breakthrough ceremony took place on 6 January 2022.

Trunk Road T2 constitutes the middle section of the Route 6. This contract includes the design-build and equipping for a 3.4-km-long dual two-lane trunk road that connects the former Kai Tak airport to Cha Kwo Ling. It also covers the construction of two ventilation shafts, electrical and mechanical engineering work as well as roadworks. The project is expected to be commissioned in 2026.

One of the key challenges is to construct this deep subsea tunnel in adverse geology, as it is rock, mixed face and alluvium. This is why the construction is featuring a wide array of methods. Under the Cha Kwo Ling village, which is a compact site sensitive to noise and vibrations, teams have been using drill-and-blast and drill-and-break methods to excavate materials from this 200-metre-long section.

Two Tunnel Boring Machines (TBMs) are deployed to dig the 2.4-km-long twin sub-sea tunnels. Thanks to their accessible cutter heads, both TBMs can adapt to the diverse geology and to the depths, exceeding 40 m below sea level. Also, due to space limitation for TBM launch at the Former South Apron of the Kai Tak area, a twin – circular (“Peanut”-shaped) shaft was constructed to launch the TBM. As the first TBM has been delivered in July, the first TBM break-in happened in December.

In November 2021, Victoria and Rhea, the two TBMs operated by Bouygues Travaux Publics, were indeed inaugurated! Their naming marks an important milestone in the project: excavation work on the 2.4-kilometre underwater tunnel linking the former Kai Tak airport to Cha Kwo Ling started in December. 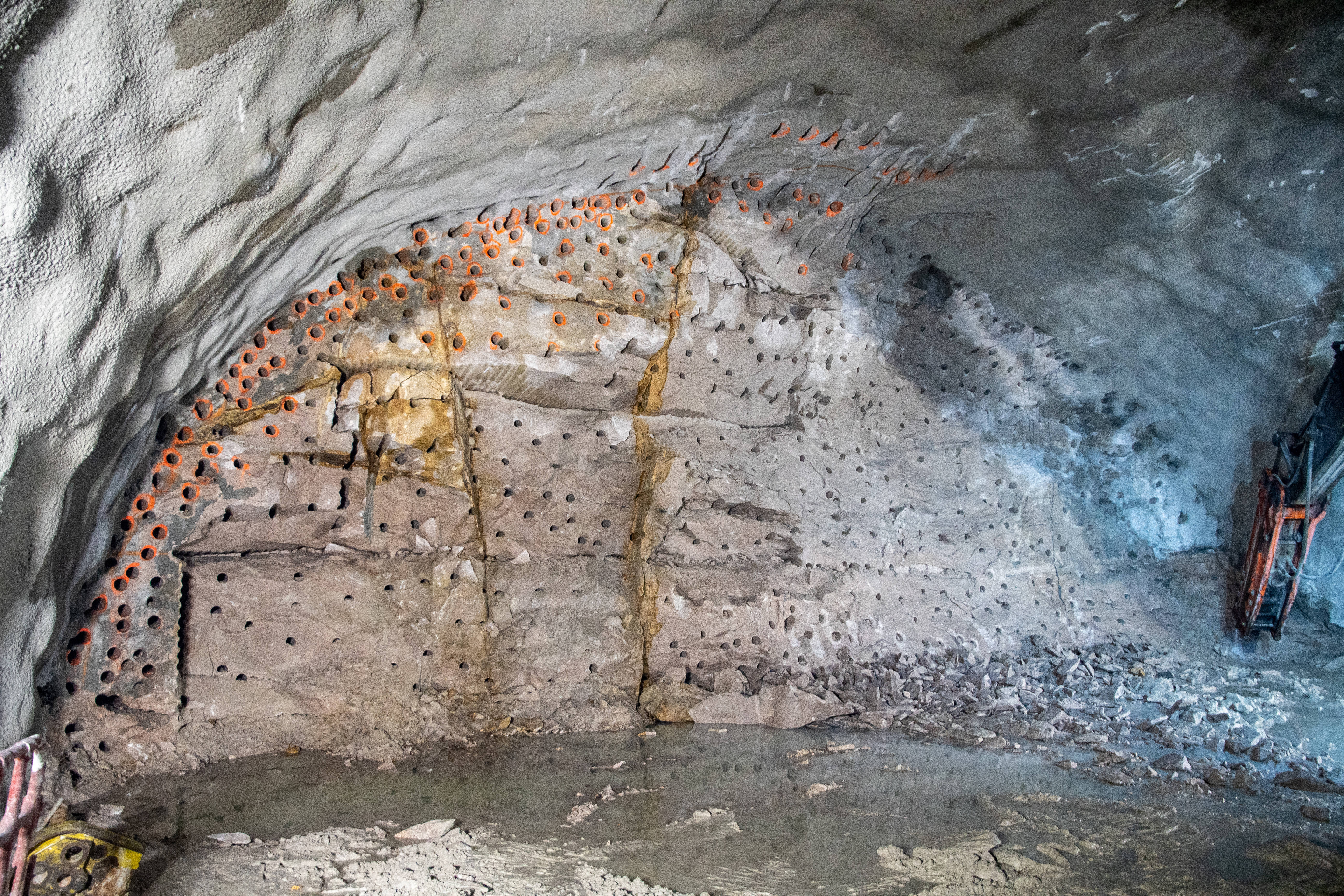 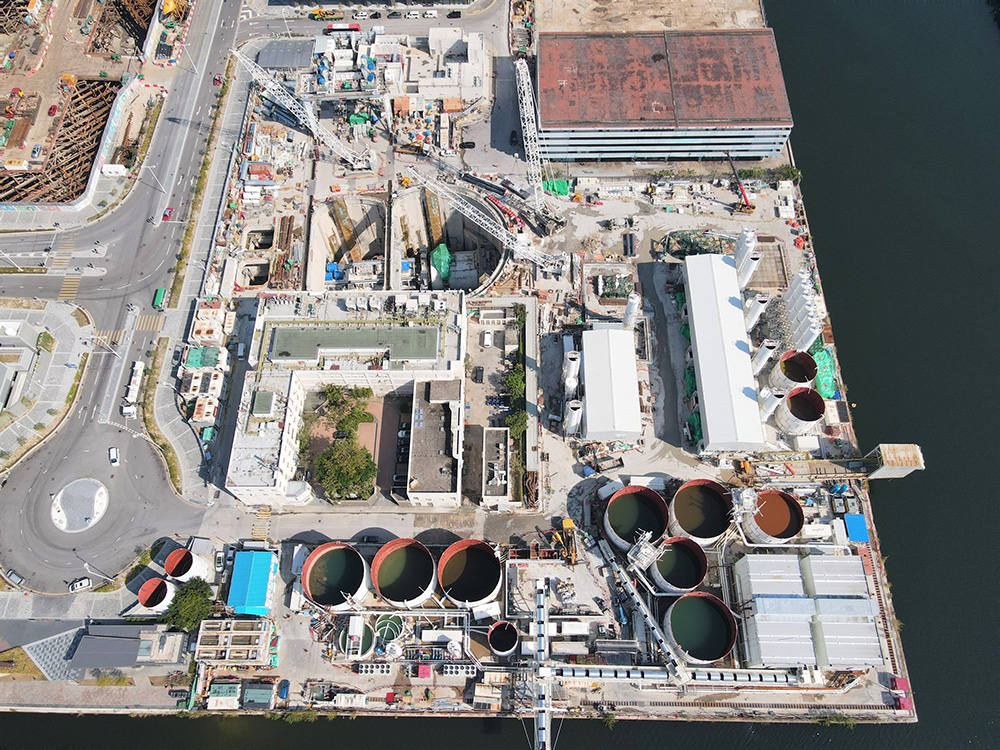 The TBM components have been lowered into the Launching Shaft and assembled.

An expertise to face these greats challenges

In addition to these construction constraints, teams on both projects are facing a tight schedule. The CKR tunnel has to be delivered in 2025, and for its part, the ventilation shaft used at the beginning of the worksite to remove excavated material is due to be handed in Q2 - 2023. As for the TBM program for Trunk Road T2, it is a challenging one as well. Plus, 8,000 m 3 of rock must be removed by drill-and-break method for the construction of the Cha Kwo Ling. The next milestone for this tunnel is to start the excavation of the basement of East Ventilation Building at the tunnel portal in September 2022.

Congratulations to all the teams involved for their daily commitment and their hard work. Way to go!