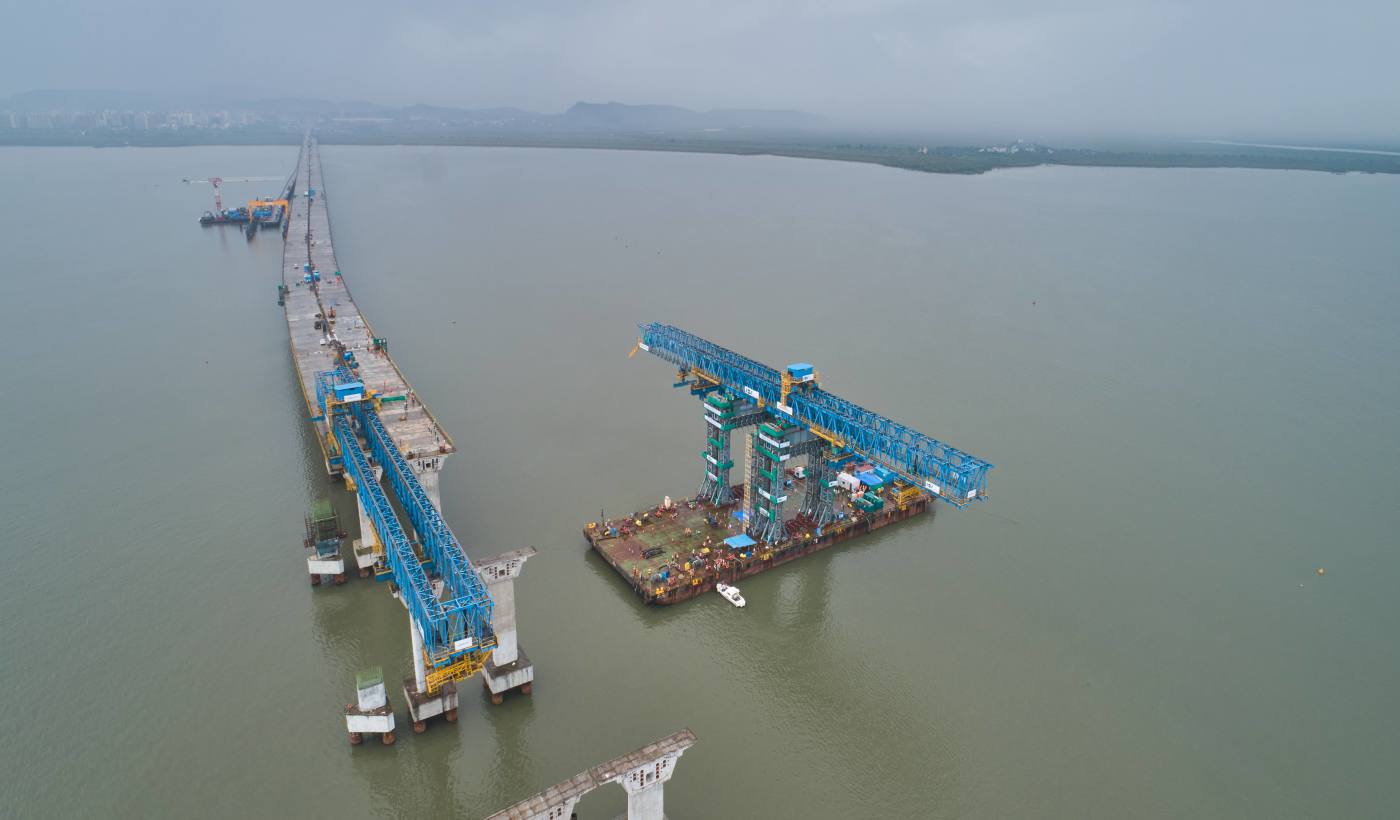 VSL teams have successfully performed a key and critical milestone on the Mumbai Trans Harbor Link project, consisting in the relocation two launching gantries in the open sea: these are steel giants of 950 tonnes, 135 m-long and 6.5 m-high truss.

Alignment of Package 2 is such that the OSD Navigational steel spans comes in between the segmental concrete viaduct. Hence, two of the three launching gantries operated in the project had to relocate from one end of the package to the other to take up the remaining segmental spans. Launching gantries are used to lift and support bridge segments as they are placed while being supported by the bridge piers.

An alternative solution to save time

Original relocation scheme was to dismantle and re-assemble using barge cranes and temporary trestles: this meant a minimum two-month-period per launching gantry. As relocation was foreseen to happen during peak monsoon, duration beyond 2 months was projected due to marine conditions. As this would delay the major milestones and project completion, DTJV requested VSL to come up with options other than the conventional schemes.

Keeping in mind that time is the essence of this operation, VSL proposed to relocate the launching gantries in a ready to erect span condition without necessitating any dismantling and re-assembling operations. Options explored were to use either a crane or to use the OSD Barge with VSL’s Heavy lifting technique. After numerous discussions on viability and marine statistics, it was concluded to shift the launching gantries using OSD Barge with VSL’s Heavy Lifting technique. Method was widely accepted as both the time and cost effective.

Team of experts from DTJV, VSL Technical Centre (Singapore), VSL Heavy Lifting (Switzerland) and VSL India participated several online discussions prior to an onsite workshop in July 2022 to confirm the schedule of relocation. Based on the marine data, two suitable tide windows were selected to carry out the relocation of LG1 & 2 respectively.

Beforehand, the launching gantries were strengthened to carry out this operation. While they were getting strengthened, a special Aqua Float Barge was getting ready with four lifting towers, lifting beam and four SMU 580 Jacks with load introduction points onto the lifting beam to take a load of 950 MT of launching gantry. The barge was also checked by the Marine Warranty Surveyors for its efficiency to work in the marine with such heavy load. Entire worksite was inspected in line with MEOP (Major Equipment Operation Permit) procedure set out for the works and the inspections were carried out by both VSL India Site management and experts from VSL Singapore Technical Center.

LG1 was lowered on 17th Sep 22 and shifted & lifted to its new location on 22nd Sep 22. Similarly, LG2 got shifted between 4th Oct 22 to 7th Oct 22. VSL Heavy lifting technique with BRAVO control system was used to lower and lift the launching gantries with precise synchronization of four SMU 580 HL Jacks. Barge maneuvering was controlled by DTJV. Entire operation was a huge success amidst various challenges.

Relocating a launching gantry as it is from one location to another was a first of its kind for VSL International. Such a huge task comes with several challenges posed by inclement weather, limited tide window, maneuvering of barge, stability and other safety risks while working over sea. Greater challenge was to lower the launching gantry over pier when the tides were rising. With the barge occasionally drifting, VSL’s expertise stood strong to synchronize the Heavy Lifting operations and experience working offshore offered an assistance to client maneuvering the barge to right position. Overall, the experience was unique and satisfying for all the teams involved.