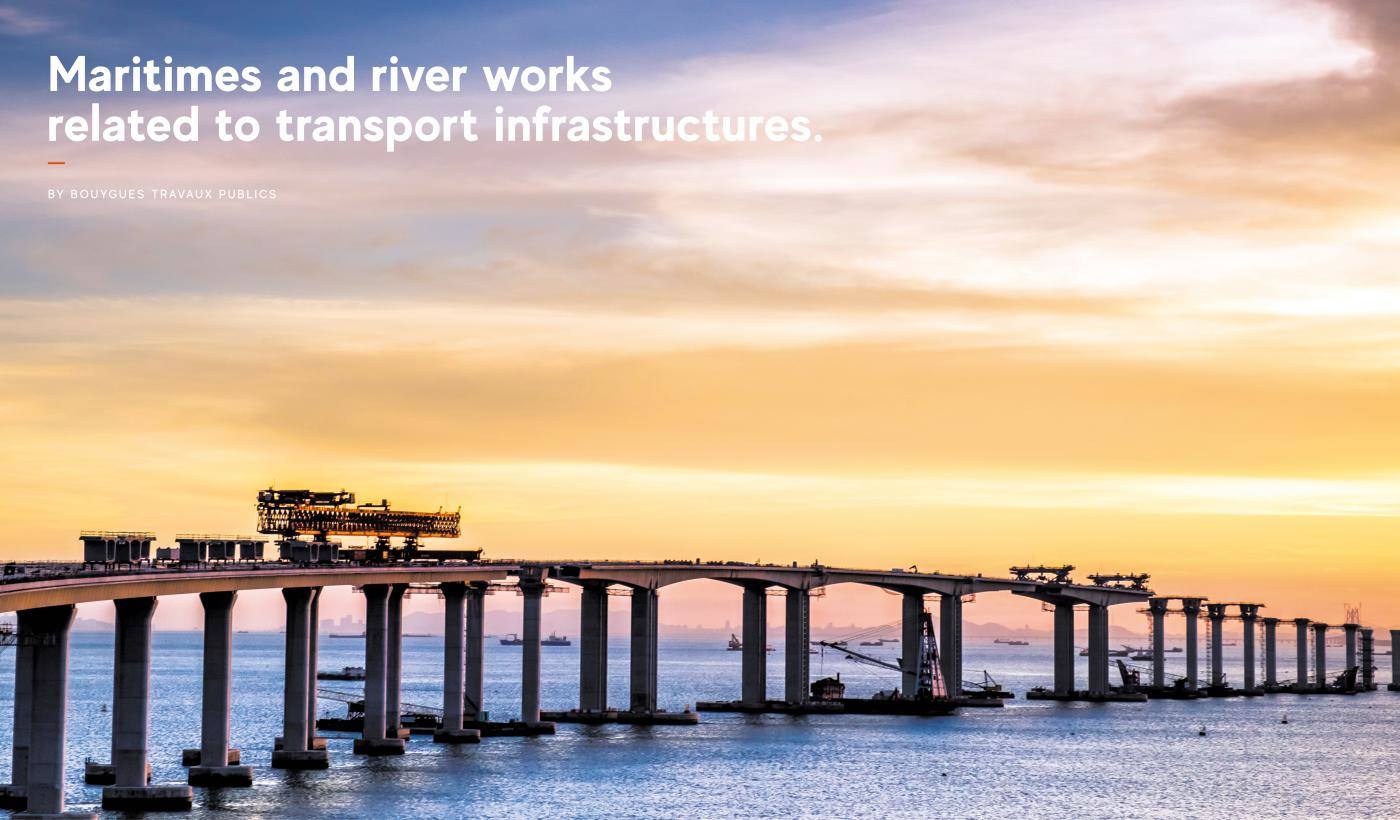 For more than 35 years, Bouygues TP has been a major player in the river and maritime works market covering design, construction and renovation of specific structures, as well as complete port projects and urban development projects at sea. Focus on the works related to transport infrastructures.

Bridges, viaducts, immersed tube tunnels: many types of transport infrastructure integrate structures that provide a crossing of the aquatic environment. These maritime or river structures, technically highly diverse, encounter similar problems related to the nature of the environment in which they are constructed:

Proficient in the entire range of construction techniques for bridges, viaducts, and footbridges, Bouygues Travaux Publics has built its reputation on its ability to construct emblematic structures and to design equipment and tools tailored to the natural constraints of the site. Not quite a tunnel, not quite a maritime structure, the immersed tube tunnel is an economically and technically appropriate solution for medium-length or extra-wide crossings.

Our added value also lies in our commitment to R&D. Thanks to its varied and complementary expertise, our technical department is able to study the feasibility of exceptional projects, such as floating bridges, mobilising advanced skills in both hydrodynamics and structural calculations. 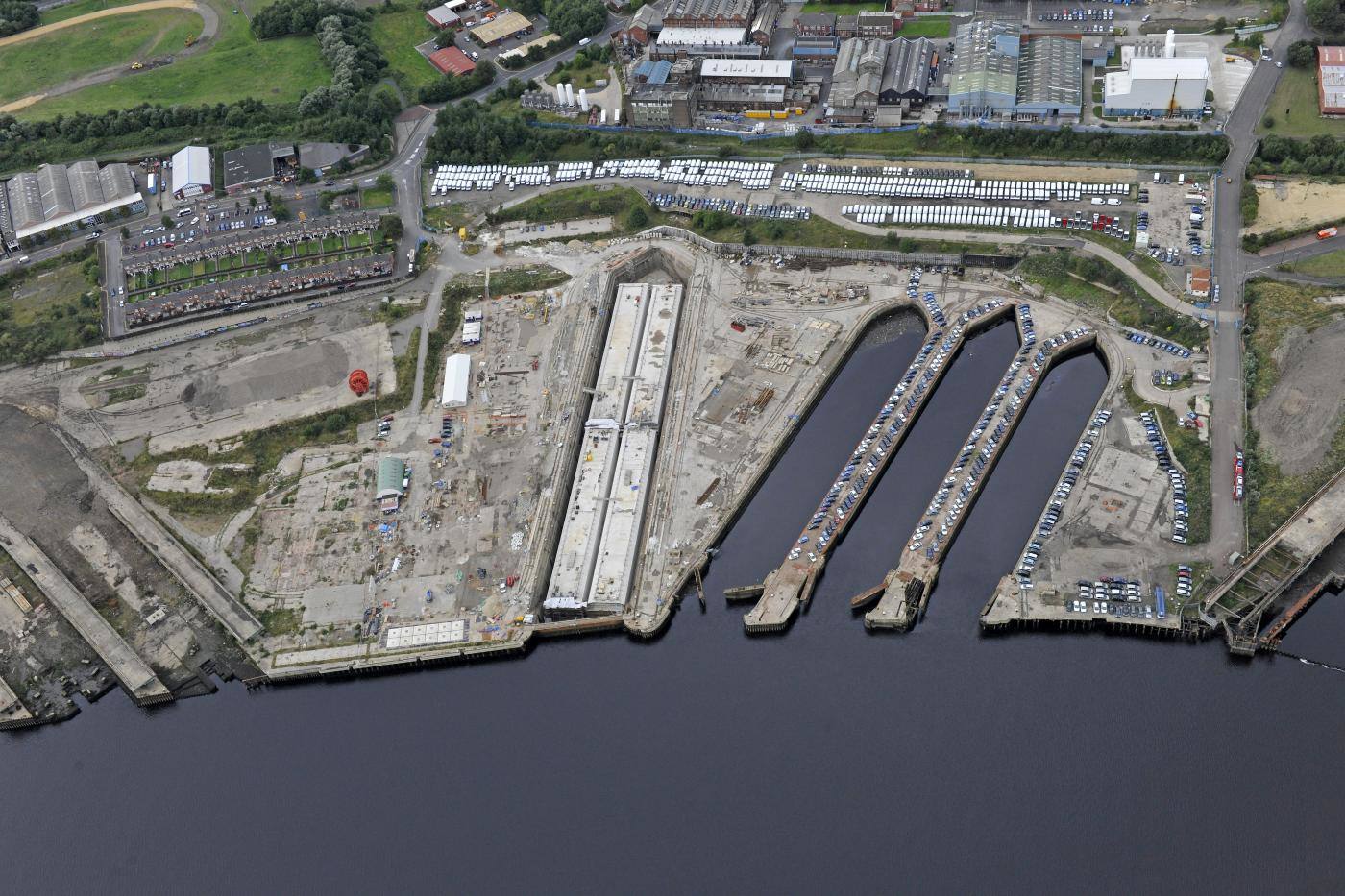 The New Tyne Crossing in Newcastle, opened to the public in early 2011, doubled the length of an existing structure inaugurated in 1967, thus enabling decongestion of a key route for north-south traffic between Scotland and England. The project, spanning 2.5 kilometres, highlights the breadth of Bouygues Travaux Publics’ expertise: an immersed tube tunnel made up of four pre-stressed caissons, earthworks, road works and traditional tunnels, including two tunnels bored using SCL (Sprayed Concrete Lining). Without interruption to the Tyne river traffic, the existing cast-iron segment tunnel was also upgraded to current standards, particularly in terms of lighting, signage, drainage and ventilation. Both the old and new tunnels now benefit from a water mist system for active fire protection, a first in the UK at the time. 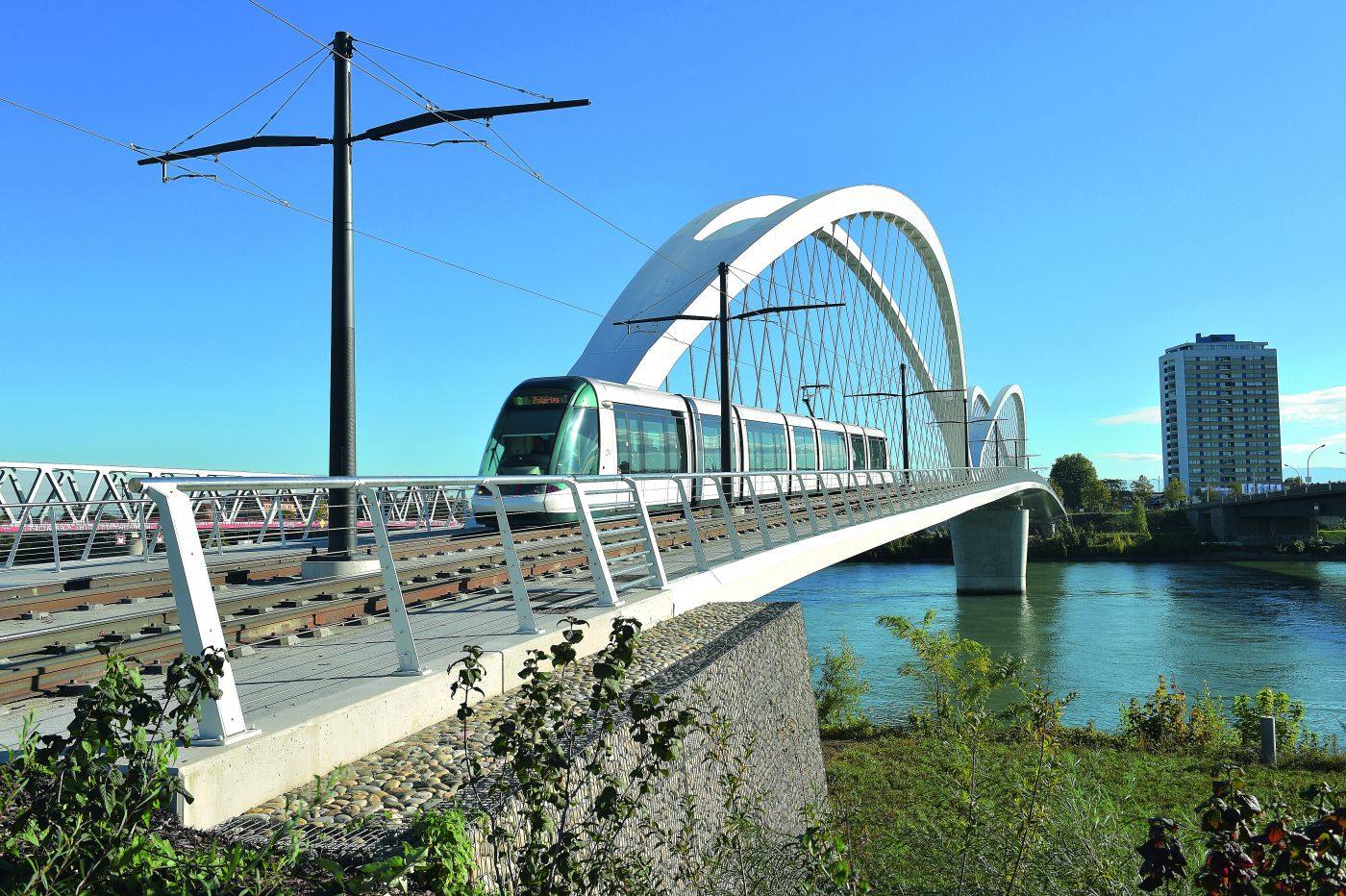 The Beatus-Rhenanus bridge, the first French cross-border structure dedicated to eco-friendly modes of transport, crosses the natural border formed by the Rhine and extends the Strasbourg mobility network to the city of Kehl, in Germany. At 290 metres long and 16 metres wide, this double bowstring-arch bridge with double arches accommodates two tramway tracks as well as pedestrian and cycle lanes. It crosses a 240-metre river gap with a clearance of 7.5 metres and only rests on a single pier in the middle of the river, built in a cofferdam, and completed by two abutments on each bank. The complex framework of the bridge, made entirely of steel, was transported by barge in several sections from the manufacturing plant and then stored on the river bank, thus reducing the impact of the construction site on the environment. The installation of the two decks required a great deal of technical expertise: levelling of the deck on the bank; loading from the river bank by launching them onto the barges; placing them on the piers and abutments by moving the barges; and finally, adjusting them to their final position. 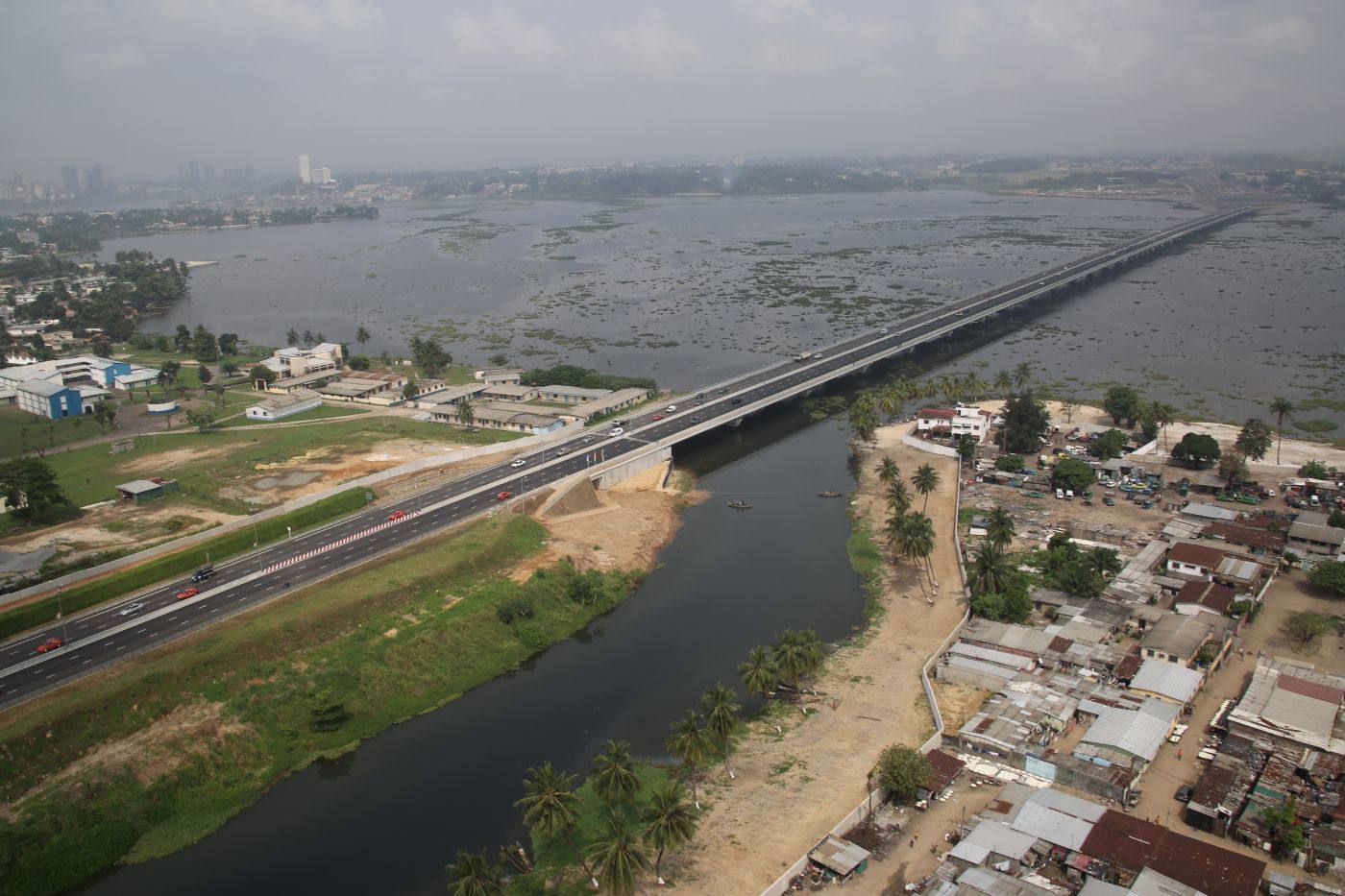 Henri-Konan-Bédié Bridge
Ivory Coast
Design and construction of a motorway link across the Ebrié Lagoon, linking the north to the south of the city of Abidjan

The Henri-Konan-Bédié Bridge is the flagship structure of a 6.5-kilometre stretch of motorway designed for development of the country’s economic powerhouse. Supporting a 2 x 3-lane road and stretching over 1.5 kilometres, Abidjan’s third bridge connects the Riviera district to the north and Marcory to the south, by spanning the lagoon. One of the very first concessions in West Africa, the project comprises two sections of motorway, an interchange and a 21-lane toll plaza. The 1,500-metre-long double deck consists of 2 x 30 fifty metre-long isostatic prefabricated caissons, laid on a single crosshead, seated on two very deep piles acting as a pier. The deck was slid onto a barge for transfer. It was then positioned using jacks in order to facilitate its installation at low tide, first on a temporary support and then on a permanent support. The construction involved locally recruited teams. Mock-ups were made on the ground in order to finalise the formwork for the crossheads and caissons, thus enabling the construction workers to be trained. 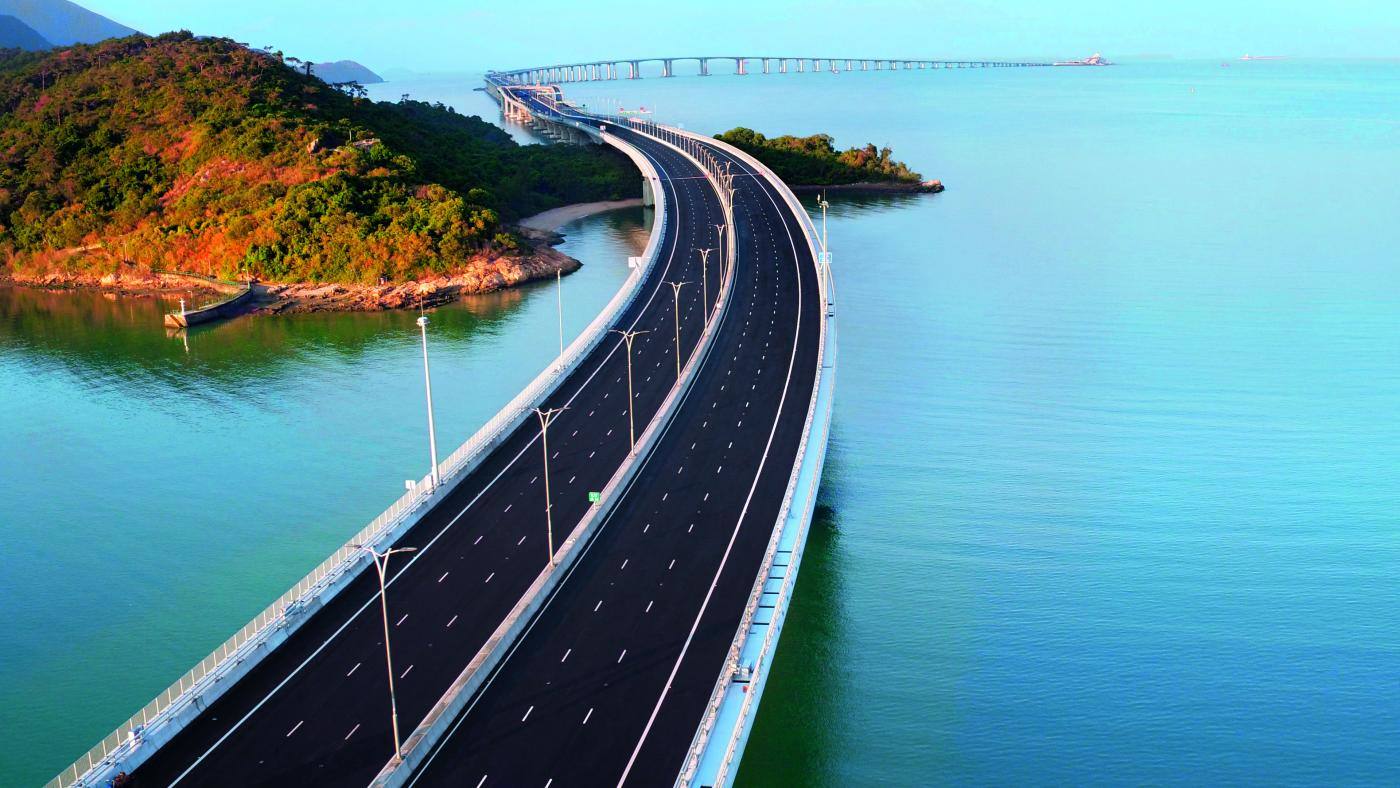 The Hong Kong-Zhuhai-Macao Bridge is a 42-kilometre-long set of structures that is part of a 55-kilometre motorway project spanning the Pearl River estuary in the South China Sea. Bouygues Travaux Publics, VSL and Dragages Hong Kong, subsidiaries of Bouygues Construction, were involved in a 9.4-kilometre viaduct section of the project linking the island of the international airport to the edge of the territorial waters of Hong Kong by a 2 x 3-lane road over deep sea waters. The viaduct is composed of a 9.4-kilometre-long double deck formed of 5,714 prefabricated segments. This exceptional project was completed using two launching gantries (one on the land part of the structure, the other on the high seas), a 950-tonne floating crane and a pair of custom-built lifting frames. Designed to withstand major seismic events, this engineering structure is, to date, the largest maritime bridge in the world and an exceptional project for Bouygues Travaux Publics in Asia. 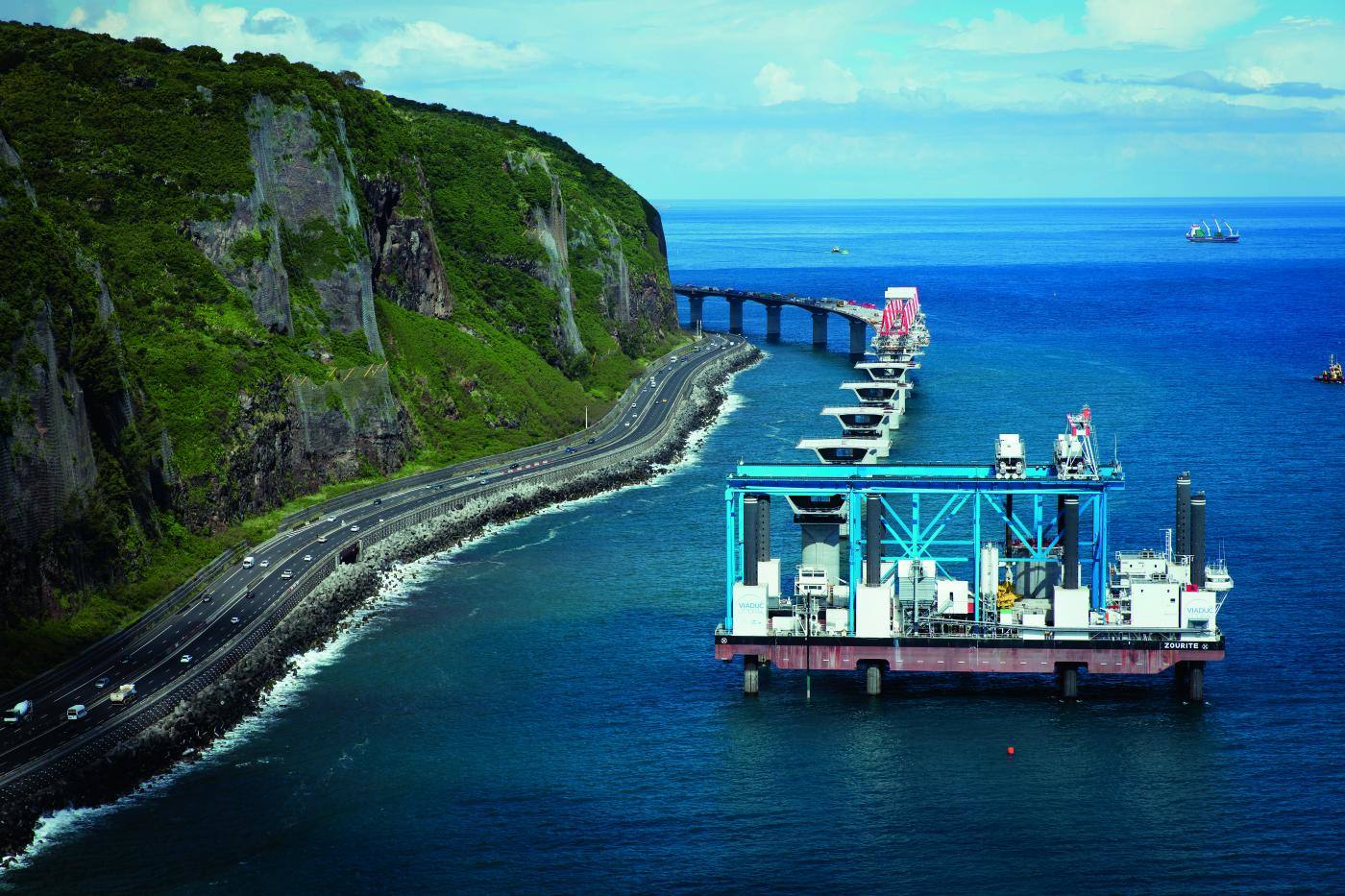 Viaduct of the New Coastal Road
Reunion Island
Construction of a sea viaduct, parallel to the coast, linking Saint‑Denis to La Grande Chaloupe

Designed to keep vehicles away from the risk of cliff rock falls and to withstand cyclonic swells, this sea viaduct runs along the coast for 5.4 kilometres between the north and west of Reunion Island. Parallel to the coast, this bridge is made up of seven successive decks of 769 metres each. An exceptional structure in terms of its characteristics and its maritime location, it is also exceptional in terms of the diversity of the tools and methods used to build it. 100% of the components of the bridge were prefabricated on land in two prefabrication plants and then installed by sea or by a launching gantry. Zourite, a tailor-made mega barge, was specially equipped for coastal navigation in difficult seas. Fitted with two overhead cranes and a concrete plant, it mobilised a team of experienced sailors to transport and place on the seabed the components of the 48 piles of what is now the longest viaduct in French sea waters. The six piers installed on either side of the Pointe du Gouffre are equipped with eco-designed modules that act as nurseries for the development of underwater flora and fauna.