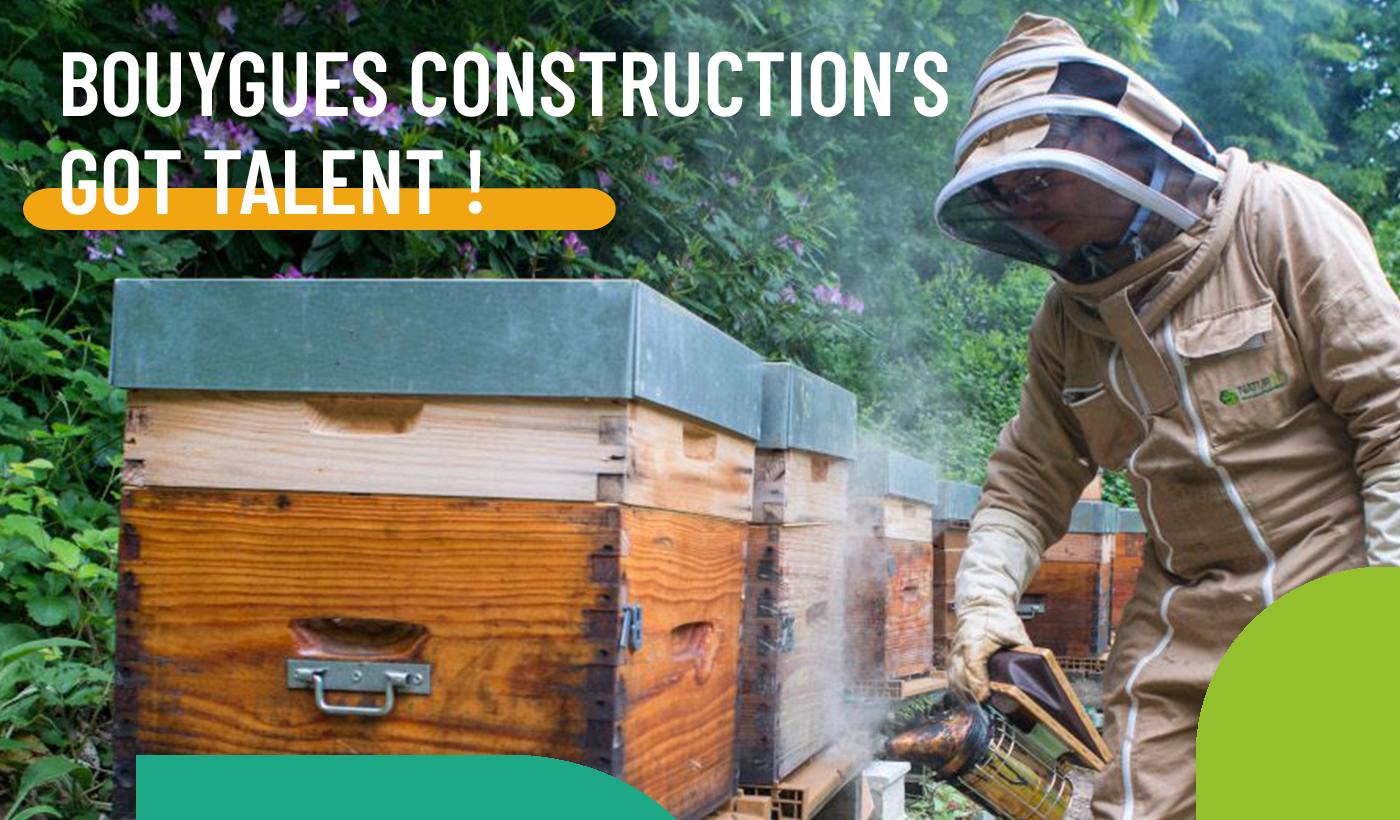 Christophe Gervais is responsible for data at Bouygues Construction IT. However, in his spare time he is also a beekeeper! To mark World Bee Day, he tells us more about this unusual hobby.

Christophe Gervais, who is responsible for data at Bouygues Construction IT, has been interested in bees for a long time. A few years ago, he decided to take the plunge and enrolled on a course all about beekeeping.

“It’s an agricultural activity which suits an urban environment well, without the need for too many alterations. Beekeeping can be practised in a city as there is no need to relocate or change your life drastically. We’re not talking about ‘giving up everything to go and raise goats in the Larzac’!” he laughs.
“My job is IT, digital, data and AI... It's all very abstract! I was lacking a ‘noble’ aspect, doing a practical activity using my hands.”

So, in 2013, he took the plunge and trained in his own time as a beekeeper with SIARP (the Interdepartmental Association of Beekeepers for the Paris Region) every other Saturday morning for a whole season. The training, which brought together about forty people, was very theoretical. “But I'm one of those people who believe that you learn by doing.” By happy coincidence, around the same time a swarm of bees (or a ‘swarming’ as the professionals call it) had gathered in the entrance of the headquarters of Bouygues Télécom, where he was working at the time.

“The site's security teams asked if I could help. The course I’d just attended had been about this very subject.” General services at Bouygues Télécom suggested he could install the colony on the roof of the Sequana building in Issy les Moulineaux. For Christophe, this was the creation of his first apiary and the ideal opportunity to turn theory into practice.

But how do you move a swarm?
Several criteria have to be taken into account (Christophe, never very far removed from his job as a computer scientist, speaks of ‘protocol’). First, the swarm must be collected, then taken to a hive, where it is gently rehoused. “The procedure changes depending on how far away the hive is. If it’s less than 3 kilometres, the bees’ ‘GPS’ must be ‘reset’ by sealing the hive so that the colony is plunged into darkness for a few days, before then reopening it. If it’s more than 3 kilometres, the bees won’t return to their old site and the hive can be left open after the colony’s been installed."

We could give you many more details, but it would be better to contact Christophe if you are interested. He would be delighted to have a coffee with you and tell you all about it in person.

What has happened since?
After this first apiary at Bouygues Telecom, which was later moved to the Technopôle, Christophe set one up at the Saint Quentin-en-Yvelines sports complex. A third project followed which was developed with teams from Bouygues Energies & Services on the Hexagone Balard project. This is the headquarters of the Ministry of the Armed Forces built by Bouygues Construction. Finally, there is the apiary housed on the roof of the atrium of TF1 in Boulogne Billancourt which was also planned together with Bouygues Energies & Services. 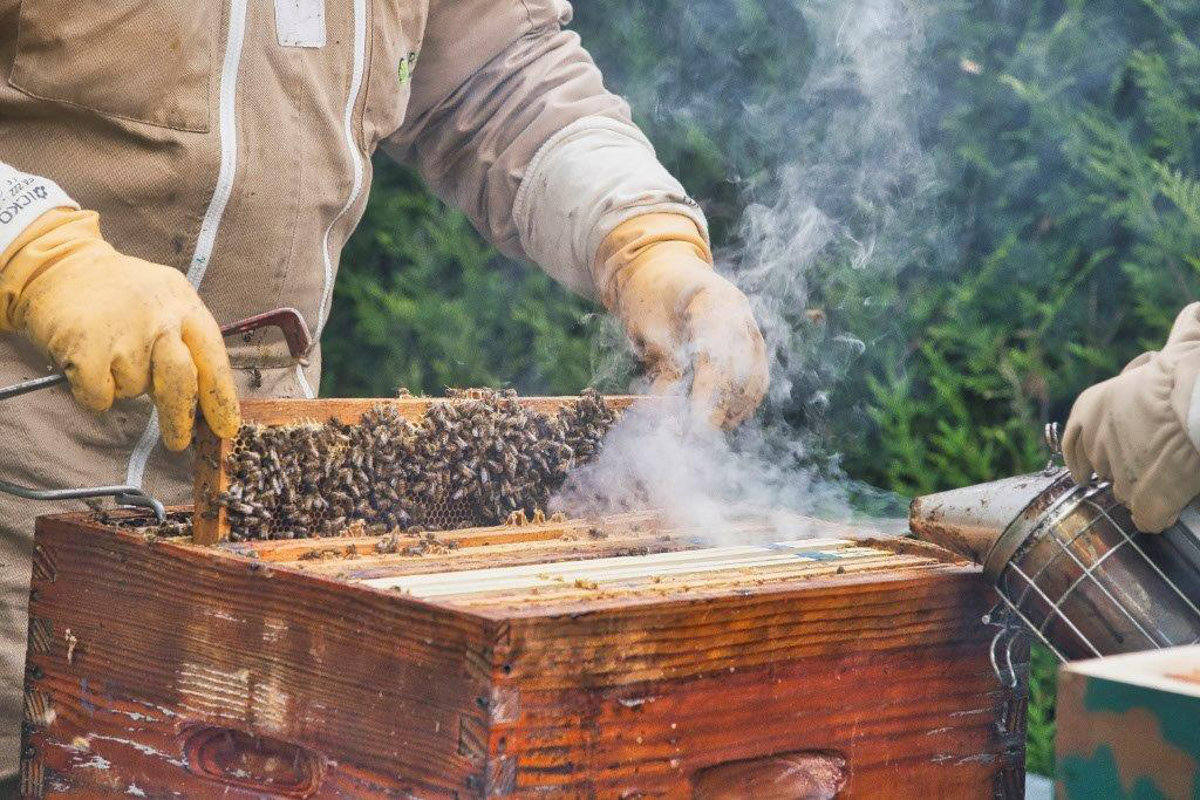 During the peak season (between April and July), Christophe visits his apiaries every weekend. Things are less intense over the rest of the year, so he only looks at them once a month. In ten years, he has gone from being a ‘simple’ honey harvester to a breeder. “I’m looking for balance. I want to maximise the population in the hive, without it becoming too large.” It is also better as regards safety in cities to have more docile bees which do not have a habit of swarming. “To achieve this, the right colonies must be genetically selected and that takes time. The genetic traits sought are docility, productivity and a disinclination to swarm.”  This selection process also involves breeding queens, which is his favourite activity. He also plans to train in artificial insemination.

“This is a very extensive field. We’re dealing with living things, but it is not just about bees! There’s a technological side - some of the hives are connected.” Christophe has designed and developed some of his equipment, such as the insulation or the steam-controlled wax melter. 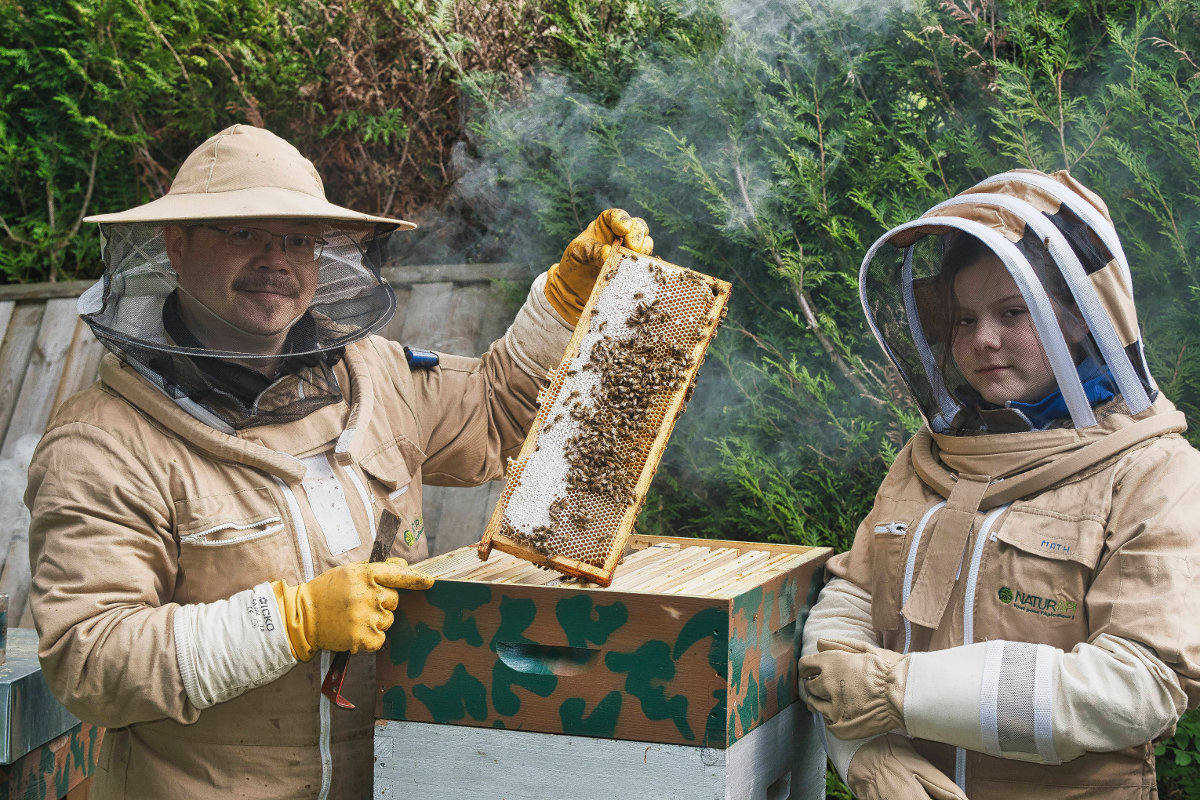 Christophe practices beekeeping with his family; on the picture, his daughter Mathilde is with him. Credits : www.danghuan.net

Christophe can also make good use of his professional skills in beekeeping, including the requirements for traceability, industrial processes, best practice and action plans, as well as customer experience via his website, etc. “It's both a craft and a highly technical activity where the procedures are refined year after year. When I'm focused on my bees, time seems to stand still.”

A long-standing beekeeping tradition at the Bouygues group
Eighteen hives are located at the back of the Challenger park and are looked after by Bouygues Energies & Services. Their story began in 1968 in Clamart when Francis Bouygues asked that a swarm of bees which had gathered there was kept.  120 to 150 kilos of honey are produced per year thanks to the trees in the gardens which produce significant amounts of nectar and pollen. The site’s additional advantage is its biodiversity.

How about giving everything up and devoting yourself to beekeeping? Christophe knows some people who have taken that step, but it is not for him. “It’ll remain a hobby. I’d have to have at least 800 hives to make a living, and harvests can be unpredictable. They depend a lot on the weather and bee mortality is high due to varroa mites, pesticides and the Asian hornet. It’s also very physical. I’m volunteering to test the use of Colas and Bouygues Construction exoskeletons in beekeeping!” 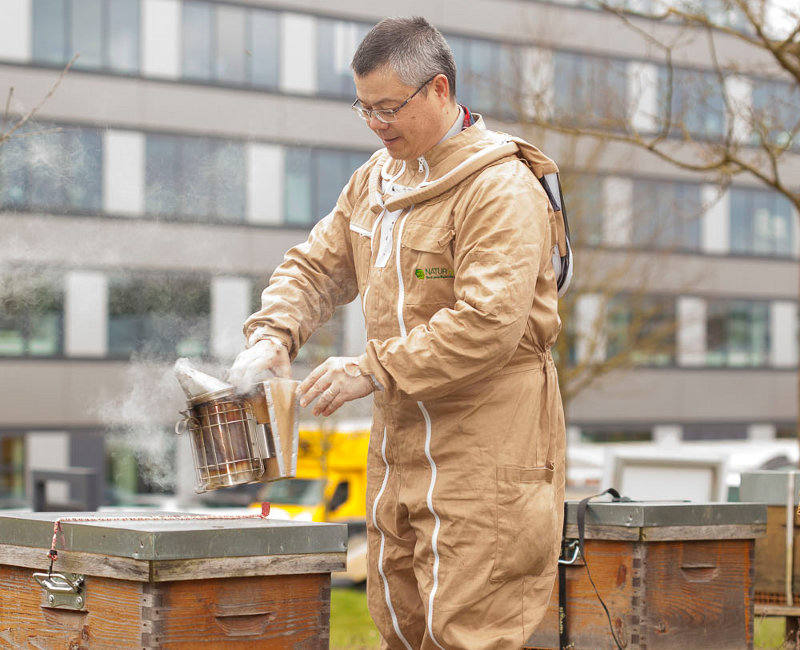 We could spent many more hours listening to Christophe telling us about his favourite subject and recounting his many anecdotes, such as how Nicolas Haelewyn, the head pastry chef at Ladurée used honey from Christophe’s Paris roof-top hives to create an ephemeral pâtisserie, or the many prizes he has won, or how his honey from Balard is sold to raise money for the Bleuets de France (war wounded), or how his hobby has changed his attitude to the natural world and biodiversity and how he is now raising awareness of these issues among students and younger people, or the day when Bouygues Construction offered a jar of his honey to ‘la Guêpe’, when, as Minister of Sport, Laura Flessel came to open the new sports complex...

Want to know more? Please go to the site https://www.gervais.org/! 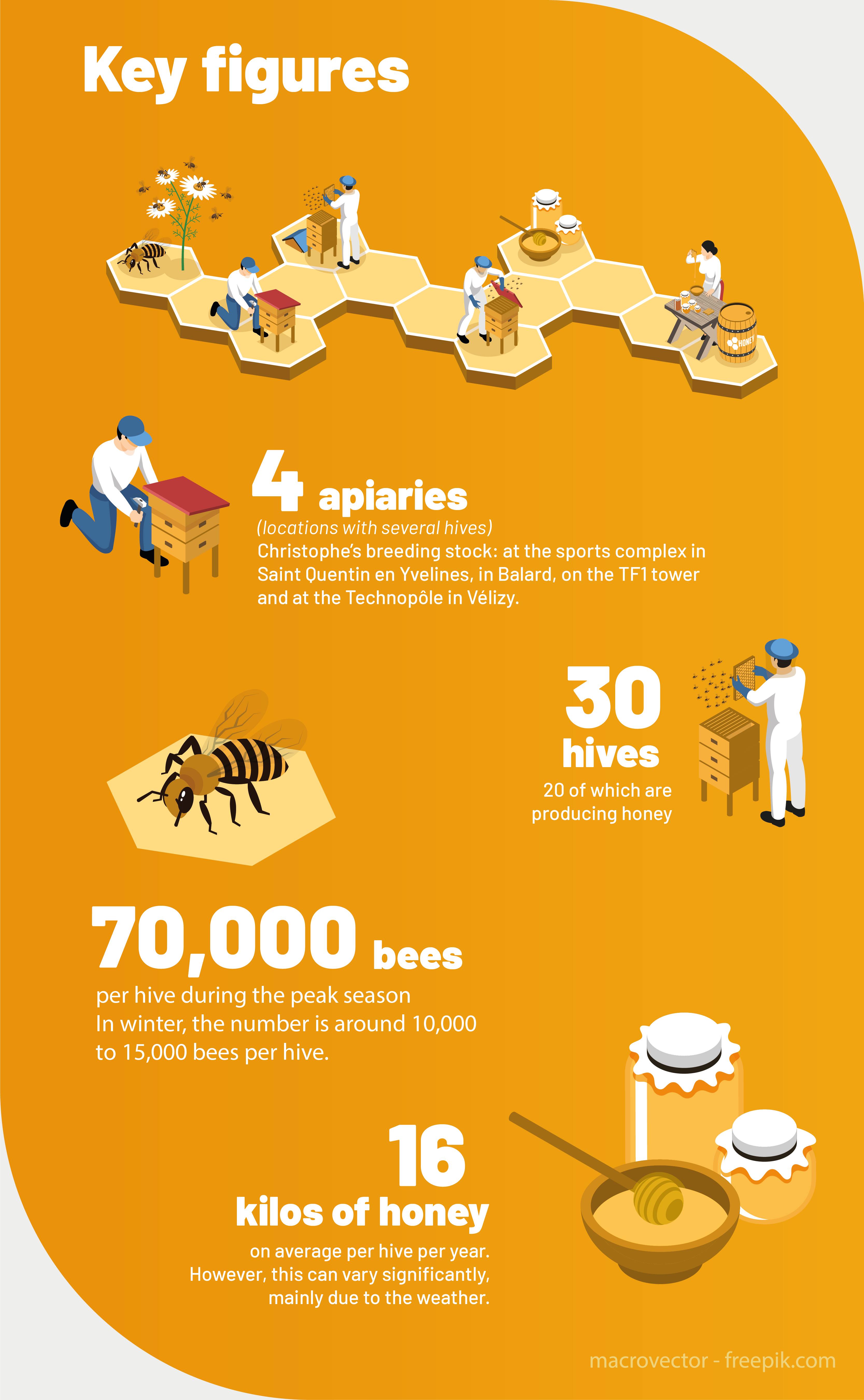 Wax from inside the hive is edible! It is used as fat in cooking, for example to make canelés. Check out the recipe!