Previous article :
Alexis Hanquinquant, employee and champion... of GOLD!
Next article :
B READY, induction day for interns at Bouygues Construction 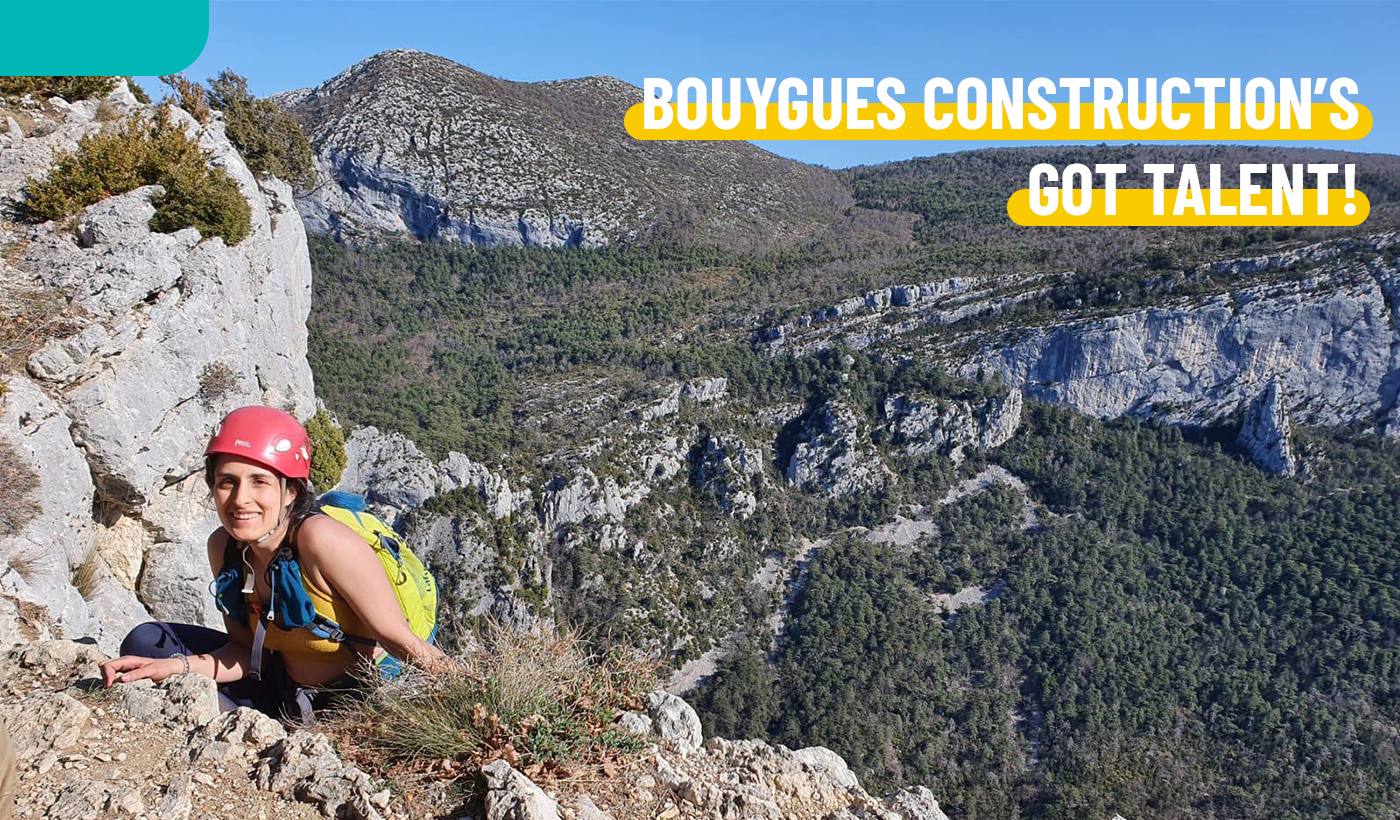 Men and women
Nayanne, an expert in digital transformation... and climbing!
By Marine JORION

Nayanne Jani-Vienot has been a Digital Transformation project manager at Bouygues Bâtiment France for more than 2 years. But in her spare time, she also does rock climbing! She tells us more about this fast-growing sport, which has allowed her to discover Europe’s most beautiful landscapes.

As a sportswoman, Nayanne has always been adventurous. After 15 years of ballet, she went to Paris for her studies and encountered schools that did indoor climbing. It was when she decided to join them, somewhat by chance, that she fell in love with this sport, almost four years ago. "I started in a climbing gym, with indoor bouldering. I then started outdoor bouldering at the many sites in Fontainebleau, then I did indoor routes, and finally outdoor. "
The ABCs of climbing
There are different types of climbing: bouldering and lead climbing, both of which can be done indoors and outdoors. “It’s the equivalent of four disciplines in one, they are so different!”, explains Nayanne. Bouldering is a type of climbing that is done at a maximum height of about 5 metres. There is no maximum height on a route, and the climber is always supervised by a belayer. If bouldering requires an intense effort, lead climbing plays on endurance. The highest level is the big route, a succession of routes.

When climbing, a boulder is considered to have been successfully completed when the last hold has been "matched", i.e. when both hands are placed on it for at least 3 seconds.

In competition, we only climb indoors, in three disciplines: lead, bouldering and speed. This category is not widely practiced by climbers, but is becoming more and more widespread, thanks in particular to the Olympic Games. Climbing was included in 2020.
"What I find most interesting is that it is a sport where you are always pushing yourself, whether you want to or not. If you do it half-heartedly, you won't be successful." adds Nayanne. It's a very demanding and precise sport that requires a lot of concentration. And sometimes training for this discipline reminds her of certain aspects of her job: "Project management is an endurance occupation. You can' t give up, you have to stay in the right frame of mind. Go all the way, no matter the obstacles, just like in climbing". She has previously shared her passion with her team by taking them climbing. They were able to experience the social aspect of this sport, which is as much about teamwork as is the smooth running of a company team: "Everyone helps each other, encourages and advises each other even if they don't know each other." 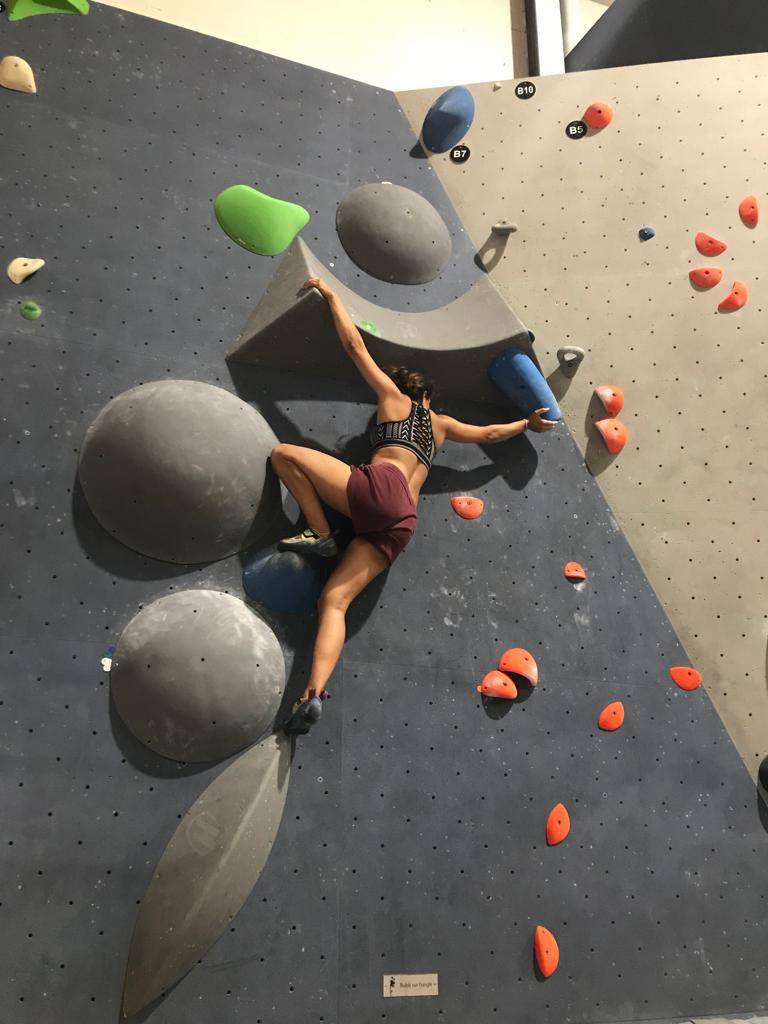 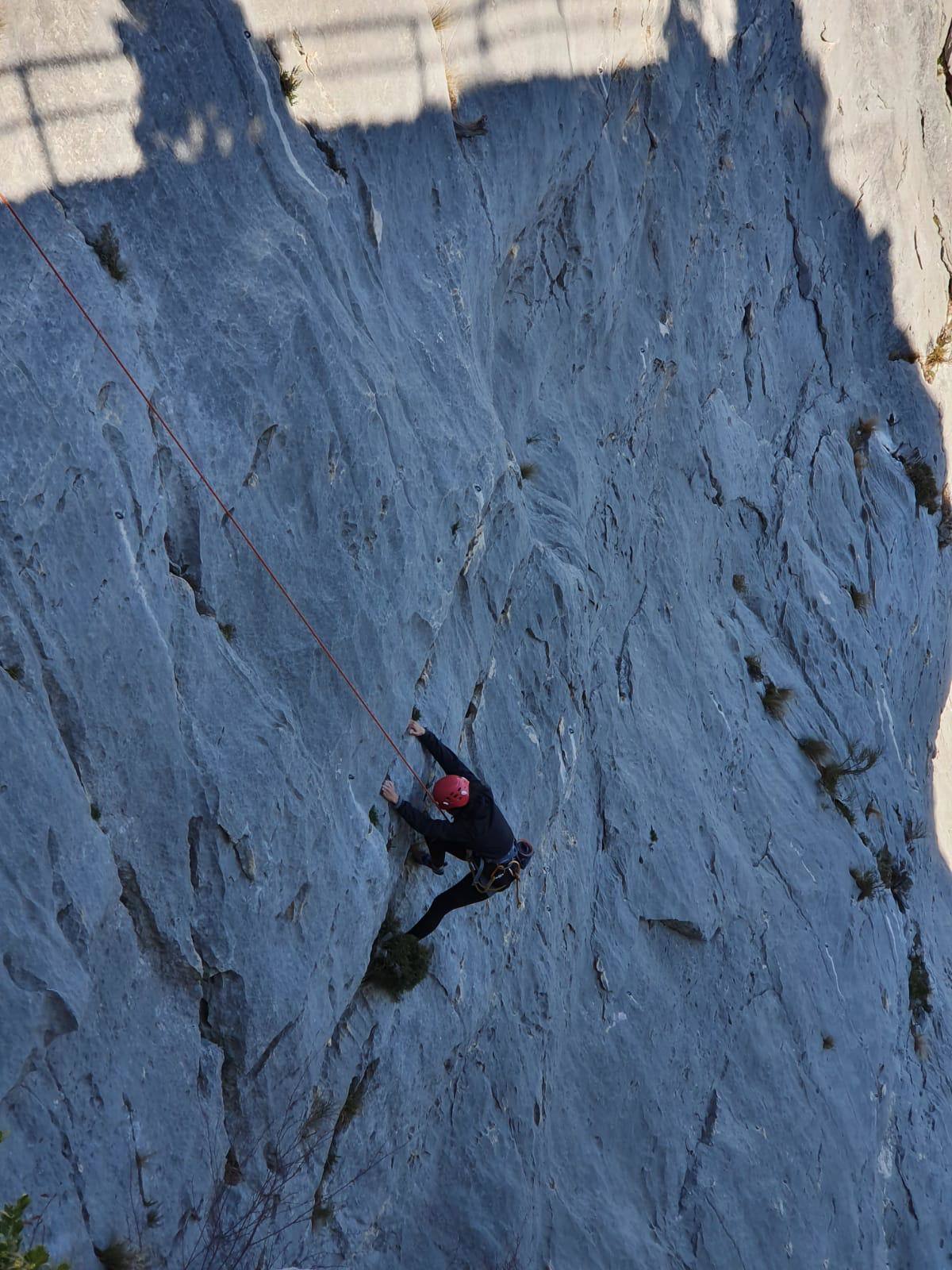 Lead climbing outdoors (Verdon)
Although she does not have a set training schedule, Nayanne has fully integrated climbing into her daily life. Twice a week, she does indoor bouldering. She has several memberships, to vary the fun from one gym to another. When the weather is good, she spends her weekends in Fontainebleau with her climbing group. Her holidays are also dictated by her passion, as she and her friends choose their destinations with one goal in mind: climbing! The Calanques, Fribourg (Switzerland), Ariège or Albarracín in Spain... The Calanques, Fribourg (Switzerland), Ariège or Albarracín in Spain... "The best training for climbing is to be able to do it in a safe environment. The best training for climbing is to climb! That's how you progress, how you gain muscle and confidence." she explains. Between sessions, Nayanne does strength training to complement her training. Her advice: take the time to warm up properly, be consistent and push yourself: "It's a sport that can get frustrating and unrewarding. It's easy to give up. Sometimes you can't complete the boulders. In my opinion, the important thing is to improve with each attempt, not to focus on a grading. Every move is a victory, it's a great lesson in humility. ”
French climbing grades
In France, ratings range from 1 - a simple hike with a few obstacles to climb - to 9c - the hardest existing level. The scale uses a number followed by a letter from a to c and/or a + to distinguish the different levels.

The grades should be taken into account but are indicative. They vary from country to country and differ between boulders and wals. "Nothing is taken for granted. In Fontainebleau, you can fail on a 4c, even if you have achieved a 6b grade" says Nayanne. "Be careful, when you do a long route, you must always climb below your maximum level, to be sure to get to the end! .”

Currently, Nayanne lead climbs up to grade 6b, and up to grade 6b+ in bouldering. "Many climbers set themselves goals for the year, in terms of grades to reach. Mine is not to be afraid of falling on a route, and I'm getting better session on session. Fear is a limiting factor in climbing. For me, it is as much a physical discipline as a psychological one.” She compares her sport to a "battle against yourself". For her, it is an exercise that strengthens determination, that can be very tough but above all liberating and gratifying. 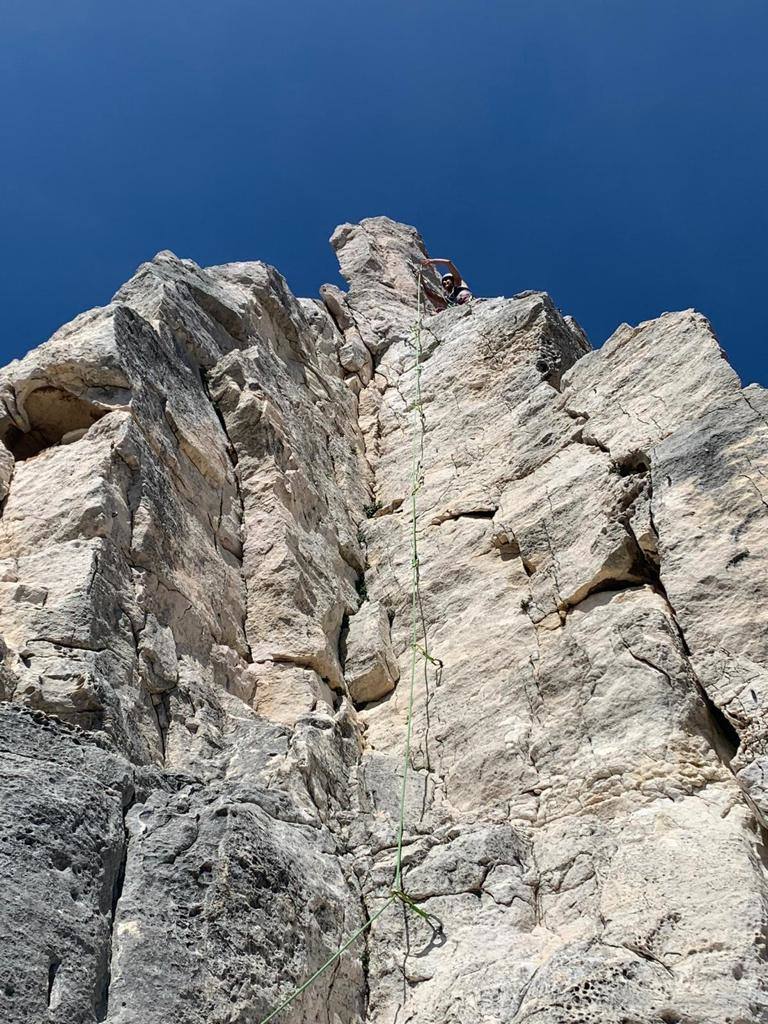 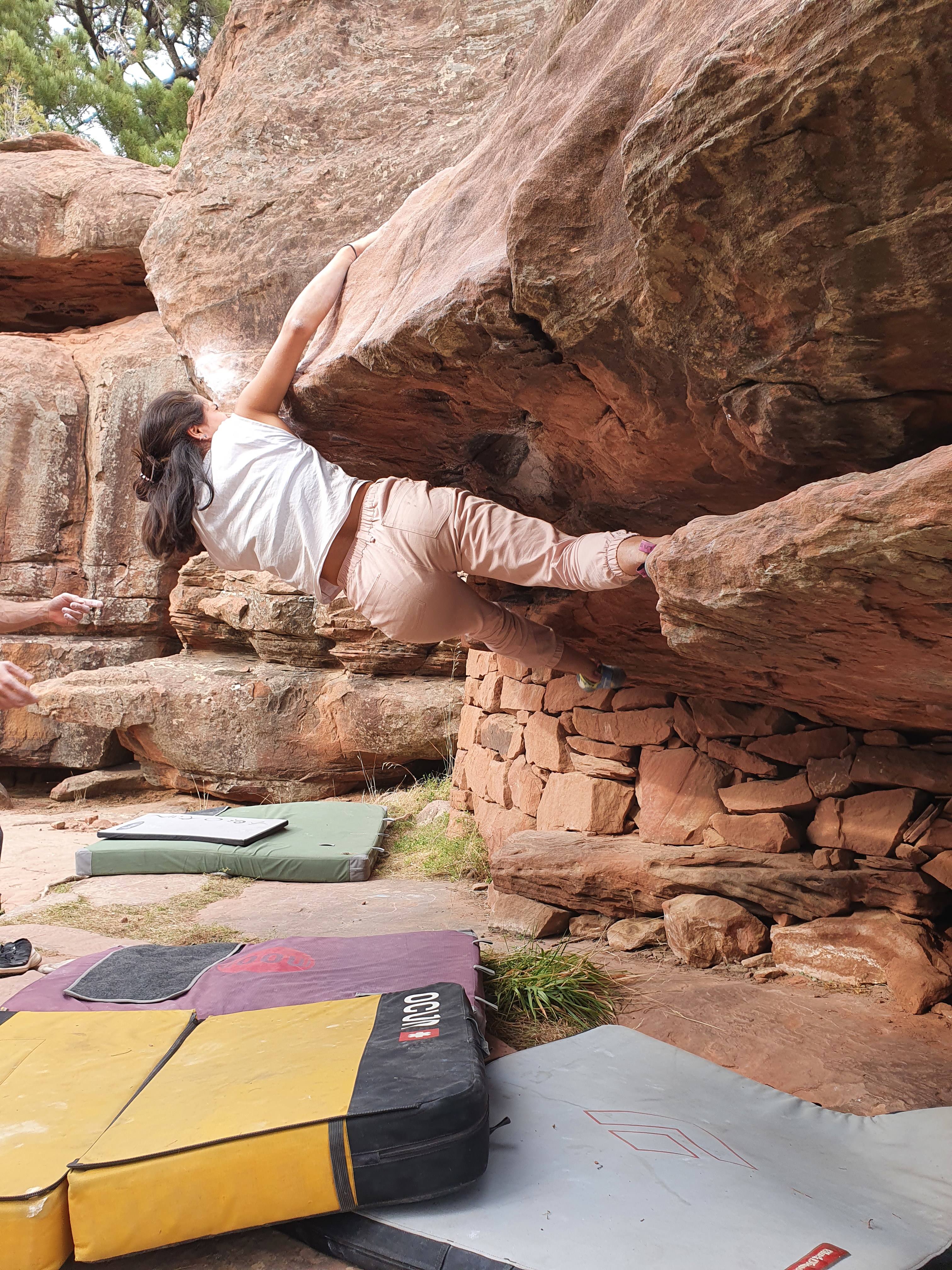 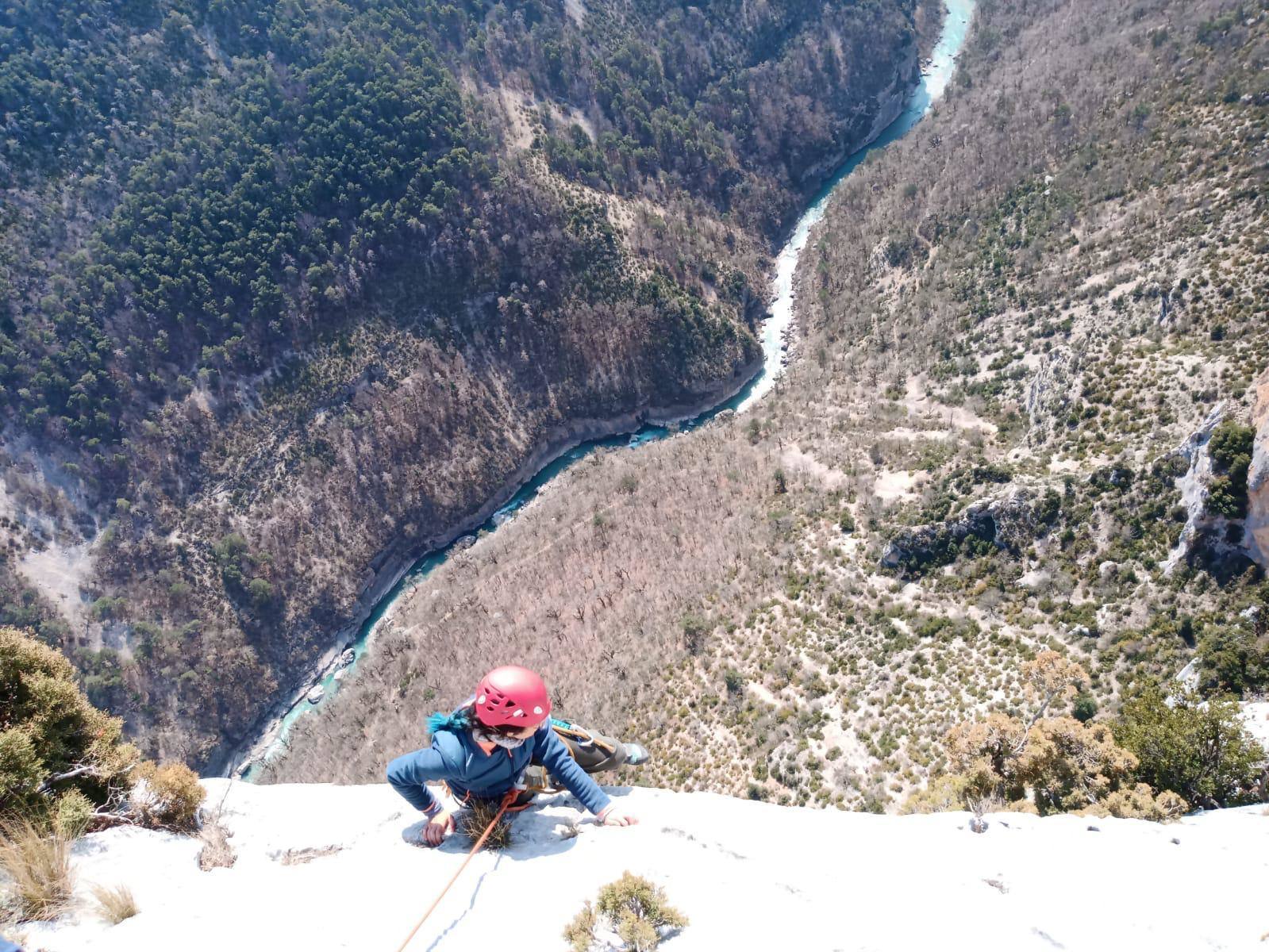 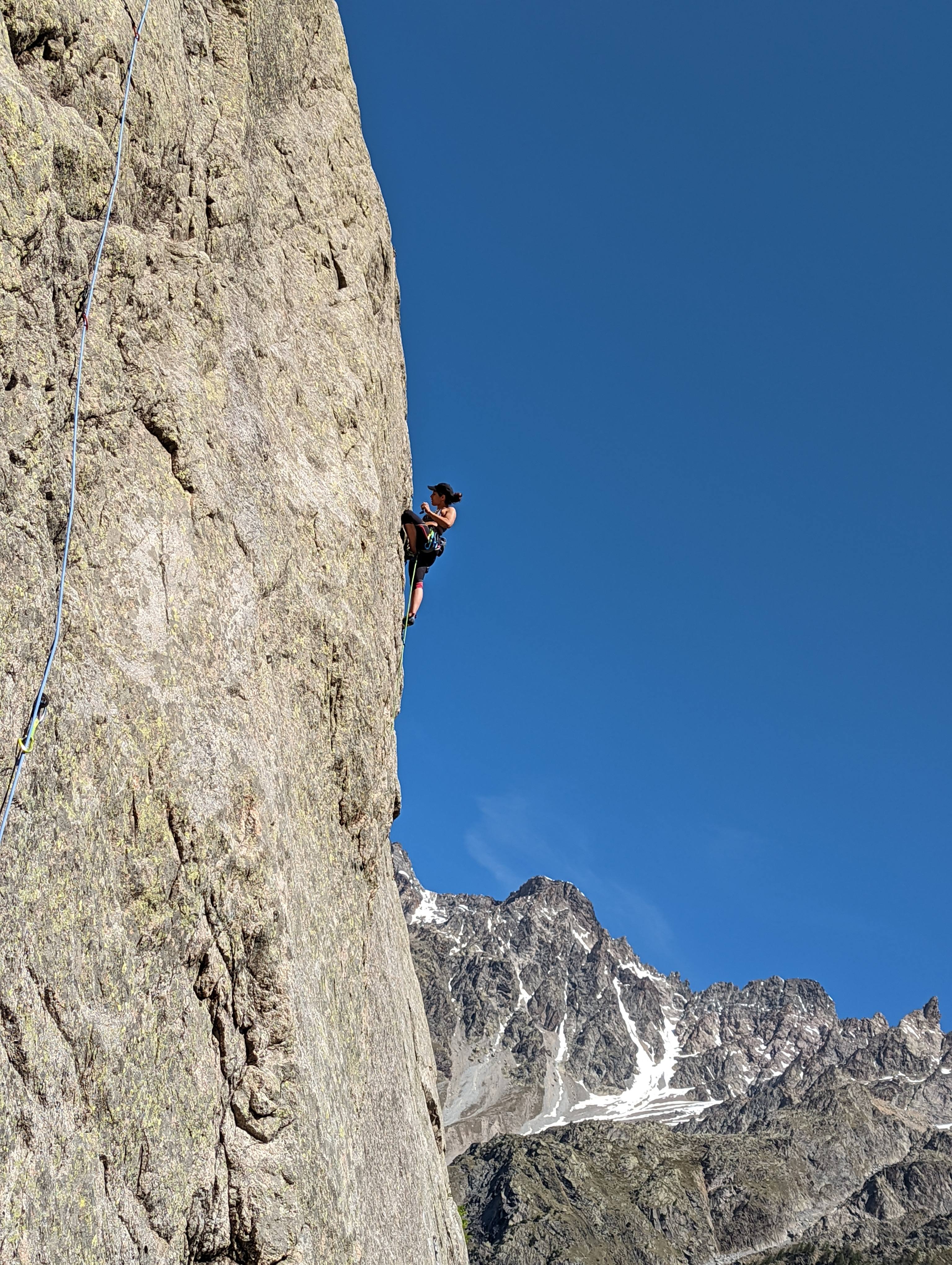 Ailefroide (lead)
Nayanne is a true enthusiast. She describes her sport as inclusive and accessible to all: "Anyone can do it. There are as many different routes and boulders as there are people. It's easy to find your preferred style of climbing.” What is also important to her is how climbing is very progressive: "I see elements of feminism in climbing: this sport allows the idea of the aesthetics of the female body to evolve, which makes it a very modern discipline". Climbing is a very complete sport, involving the whole body and combining flexibility, precision, balance and grip.

Still unsure about trying it? Nayanne has many more arguments to convince you! "It's a sport that's growing in popularity. Climbing is becoming more and more accessible with an increase in the number of climbing centres in France. These days, it's definitely 'beginner friendly'". Her discipline has also an important environmental aspect. When she climbs outdoors with her group, they always respect the forest: "You mustn't leave rubbish, clean the boulders after climbing, and don't climb when it's raining because it could break or damage the boulders. In short, we leave nature as we found it, and this raises our awareness of our environment beyond the climbing itself." The only things you need to have to get started are an adventurous streak and a pair of climbing shoes!
3 questions for Nayanne
What are the three most beautiful places you have ever climbed?
I would say Ailefroide, in the Alps: a good mix between lead and boulder, with a magnificent glacier. There is also Albarracín and its red rock boulders in Spain, and the top climb  in the Gorges du Verdon.

Your proudest moment?
The first time I did the route in the Verdon. I had only done a few of these before, I had to abseil 300 metres, alone, in the void and with difficult techniques. The view was spectacular. Now my greatest wish is to go back there.

What was the biggest challenge you faced?
For me, it has been Covid. I no longer had access to my sport, there is no alternative. I really struggled with this restriction and the post-Covid recovery was complicated. I had lost some muscle, so it was like starting from scratch, which was very frustrating. But on the positive side: it allowed my body to recover and to come back stronger!
On the same topic :
Access all content :
Log in to view all articles, to comment, or customise your filters.
Log in
Read also :
Articles suivants