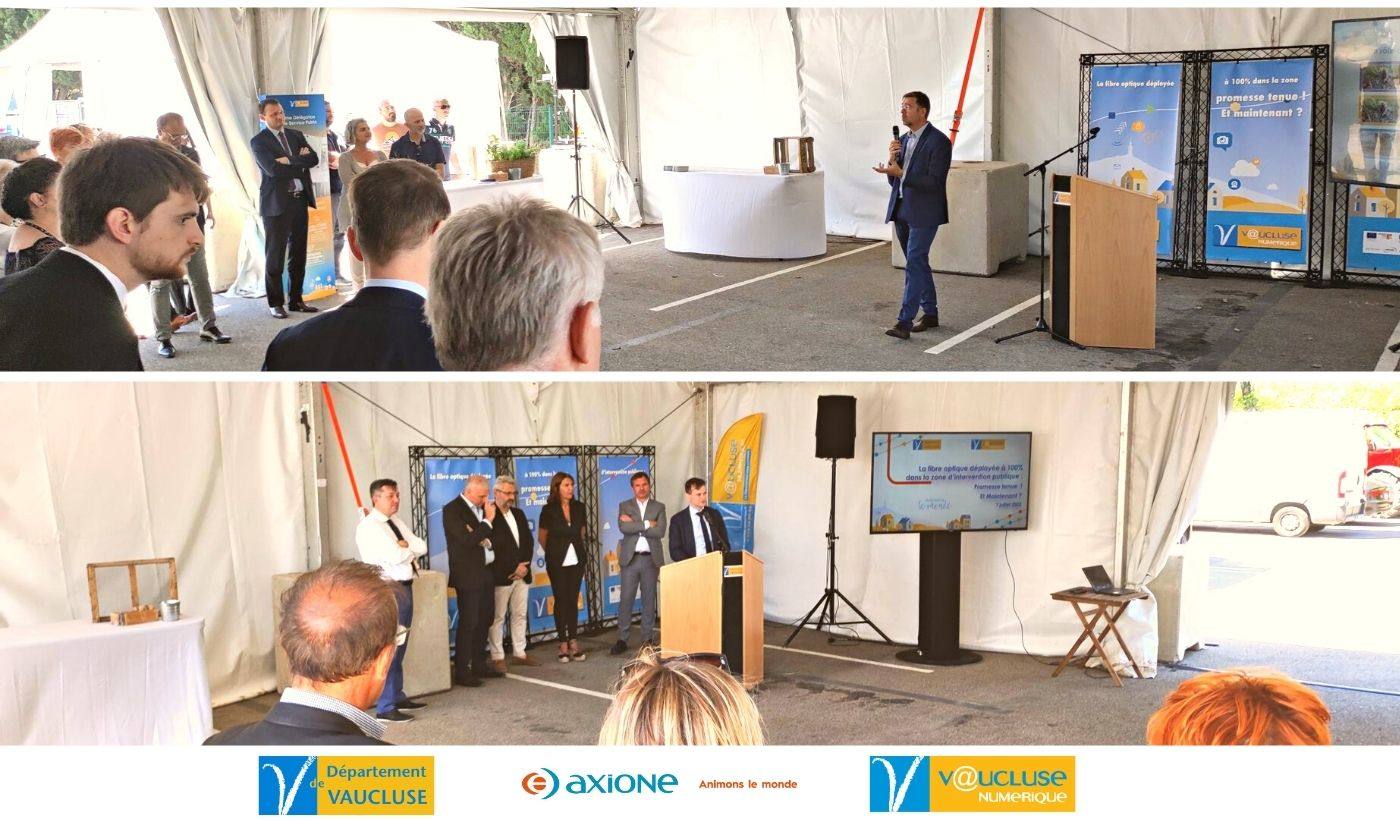 In 2011, France’s Vaucluse department entrusted Vaucluse Numérique, via a Public Service Delegation contract, with the deployment of optical fibre for professionals throughout the region, then for the general public in 2017. Today, this objective has been reached.

A new stage has been reached for the Vaucluse Numérique Very High-Speed departmental network.

The Vaucluse department is carrying out an ambitious project for the digital development of its territory, and has entrusted the design, construction and operation of a fibre optic departmental network to Vaucluse Numérique in the scope of a public service delegation contract signed in 2011.

Vaucluse Numérique designed and built this network in three phases, the last two of which brought fibre into every home within the area of public intervention between 2017 and 2021. Vaucluse Numérique thus fulfilled its commitments to meet the Vaucluse department’s ambition in the scope of the France Très Haut Débit (Very High Speed) plan.

The network’s operation was initiated in parallel to the deployment of the digital infrastructures built.

This new stage marks the end of the deployment; the focus now lies on the life of the network. Accordingly, the role of Vaucluse Numérique is now to maintain the public infrastructure, ensure its continuity and develop it in line with the territory’s requirements.

A deployment completed across the entire public initiative area of Vaucluse

Thanks to Vaucluse Numérique, all households located in the Vaucluse public initiative area have access to very high-speed fibre optic broadband, via the operator of their choice. This represents 121,513 homes, spread out over 105 districts, covering two thirds of the Vaucluse region and one third of its population, and 11 operators commercially present, 4 of which are French players.

The following have been deployed for this project :

We have implemented a public project that represents a major technological change, one that can be compared with the region’s electrification or the telephone network deployment in the last century.

The end of the network’s construction now gives way to an operational phase to ensure its smooth functioning, as well as to a development phase with the creation of new infrastructures or new services to meet the needs of a thriving region. Vaucluse Numérique is thus focused on operating activities to ensure the operational maintenance of the network provided to commercial operators, and to carry out developments to deliver an equitable service to all users in the Vaucluse region. Vaucluse Numérique has a duty to sustainably maintain and extend the digital infrastructures, taking into account the projects and the specificities of the regions involved.

-Connecting homes and companies: Vaucluse Numérique oversees and controls the installation of connections by ISPs, and offers them its support in the event of any difficulties, while carrying out some of these connections itself.

-Maintaining the network: Vaucluse Numérique operates preventively to best anticipate and limit the appearance of incidents, and remedially to resolve incidents reported (damage to the network, loss of service associated with the infrastructure, etc.).

-Developing and extending the network : Vaucluse Numérique advances the department’s network in line with new constructions or developments sought for the region.

Every month, Vaucluse Numérique already carries out more than a hundred maintenance operations; each month for the past two years, 1,000 new users have joined the network, attesting to the region’s genuine appeal for very high-speed connectivity in these times of change brought about by the digital transformation of our society.

Beyond improving present-day uses thanks to equal access to very high-speed broadband, including for the most rural and isolated areas, this major public network fosters new uses, whether through public or private initiatives, which will promote the Vaucluse region’s appeal for the benefit of all the people and businesses based there.