Previous article :
1 year later... SUCH #Digitalisation of trades
Next article :
A new hospital for the people of Amiens! 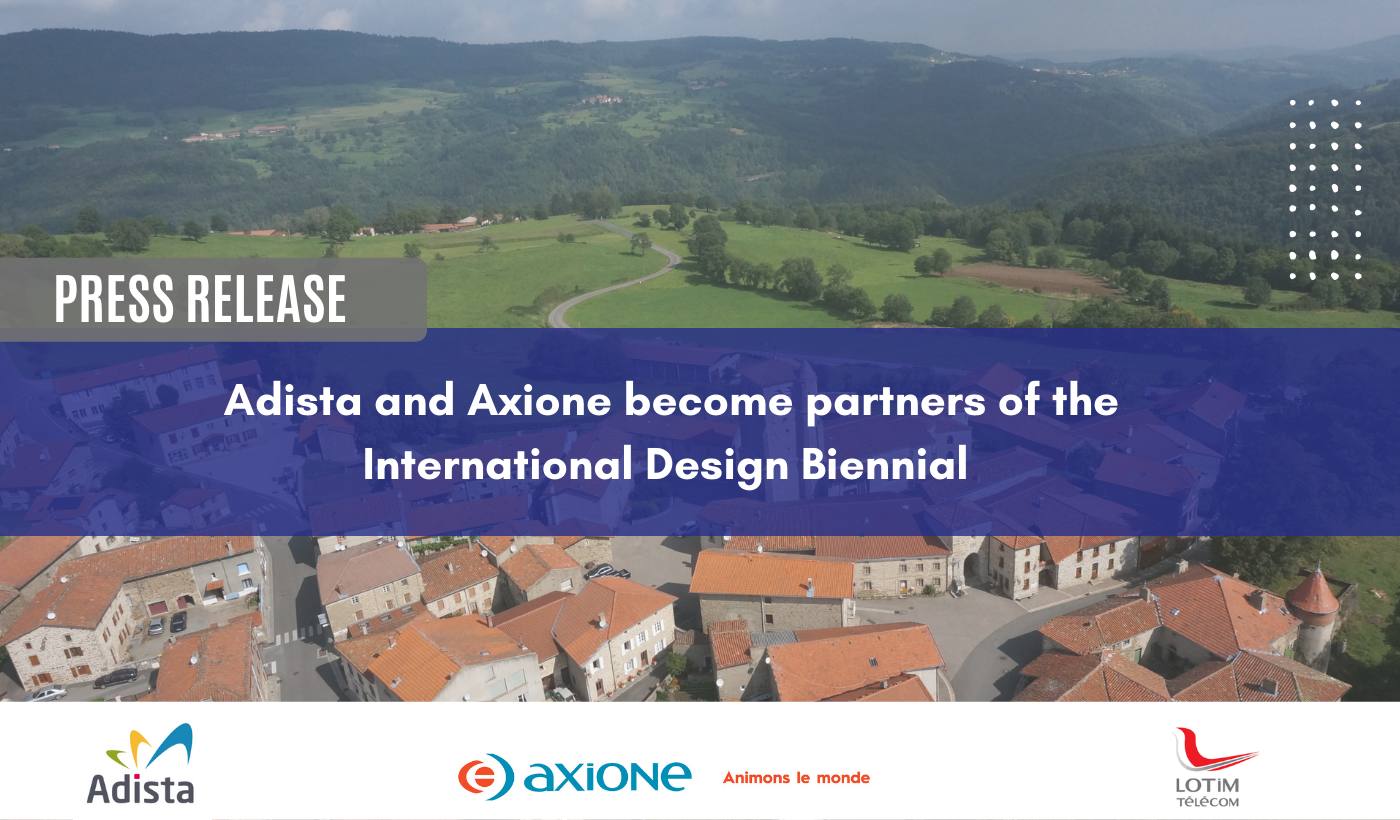 The teams of LOTIM Télécom (a subsidiary of Axione) in collaboration with the operator Adista, ensured the deployment of the optical fibre to cover the event in Very High Speed.

“Bifurcation” is the theme of the 12th Saint-Etienne Design Biennial from 6 April to 31 July 2022, a major cultural event in France and Europe since 1998. March 2020 saw a major shift in the way we live, work and function. Since then, we have undergone a radical bifurcation. Designers, researchers, economic players, intellectuals, students, art lovers and anyone interested are expected to take part in a large-scale artistic event (7 exhibitions spanning 4,000 m²) aimed at questioning how design is practiced and experimenting with its methods. As major players in the digital bifurcation in France, Adista and Axione are digital partners of the event.
Synergy between infrastructure operators and service operators supporting the digital "Bifurcation”

Our lives are a series of forks in the road, or “bifurcations” constantly influenced by events that take us in different directions. “Whether sought or endured, expected or unforeseen, these forks in the road set the pace for our activities and shape our societies.

While there is an undeniable and noticeable bifurcation at the professional and personal levels, the digital one was imposed by the pandemic lockdowns and restrictions. A new direction had to be explored: that of new uses, new tools, new modes of communication, with one of the most notable features being the mass adoption of telework. Contemplating digital divergence is the very essence of Adista's and Axione's business, which is why the two companies have partnered with the 12th International Design Biennial.

Axione has established itself as a leading player in the deployment of digital infrastructure as part of the France Très Haut Débit plan. The company designs, builds and operates the infrastructure essential to the development of digital uses by supporting the regions in their Public Initiative Network projects.

The confidence shown in Axione by local authorities and service operators has already resulted in the deployment of 2.8 million FttH connections throughout France. Its fibre optic networks now cover more than 6,500 districts and 2,500 business parks.

Adista has been a major user of Axione's networks since 2006. This partnership has been strengthened as technology has evolved. "The deployment of Axione's BLOM (Mutualised Local Optical Loop) enabled Adista to broaden its range of services in 2019 with FttH (Fiber to the Home) and FttE (Fiber to the Enterprise), thereby extending fibre optic connectivity to a very large number of businesses (large, medium-sized and the smallest)," explains Amine Gasmi, Head of Telecoms Connectivity Offers.

We are a historical partner of this event which highlights the city of Saint-Etienne. For LOTIM Télécom and Axione, it is essential to combine our expertise and technical skills with the Adista operator to serve a major cultural event in our region.

Another bifurcation to which society must commit itself today is to develop in tune with environmental and societal issues. The very nature of Adista and Axione’s activities directly impacts the vibrancy and vitality of the regions, the narrowing of the digital divide and social inclusion.
Axione was created in 2003 in response to the digital development of the regions following the French Digital Confidence Act. Its business plan is based on its ability to design, build and operate infrastructure to promote the widest possible access to and use of digital services. Axione is constantly innovating for the regions, their inhabitants and their businesses.
The company is committed to pursuing digital deployment while encouraging initiatives to optimise its energy consumption (e.g. supplying green electricity to 90 of its branches in France) and recycling equipment and materials (e.g. donating wooden reels for fibre optic cables). In 2020, its Corporate Social Responsibility (CSR) efforts were awarded a Platinum label by EcoVadis (the leading organisation for rating social and environmental performance) with a score of 74/100.
Meanwhile, Adista is experiencing strong growth that it strives to make as environmentally friendly as possible and respectful of its eco-system. The Adista Group, which is now the leading competitor to the incumbent operators, is determined to become the benchmark in terms of CSR. It has embarked on an ambitious action plan in collaboration with its staff and partners. Adista aims to establish itself as a socially responsible company that listens to its workforce, by getting involved in social and environmental initiatives in the regions following the consultation (currently underway) of its employees as part of collaborative projects. These same staff have also been made aware of the challenges of sustainable development.
Aware of its responsibility as a major player in the digital sector, the company, which has been awarded the Responsible Digital Enterprise label several times, is taking several steps to reduce its carbon footprint and that of its customers, such as reusing equipment and extending its lifespan. Adista has also announced the implementation of a datacentre powered solely by renewable energy from the conversion of agricultural bio-waste, a first in the datacentre world.

The event’s connectivity and digital support needs are colossal and depend on the match between Axione’s design and deployment of telecommunications infrastructures, and Adista as a national operator of hosted services. For the 2022 event, Axione’s subsidiary LOTIM Télécom is installing a dedicated fibre link which will be secured by the internet service provider Adista. Axione’s teams also monitor the network in real time to ensure a speed of one Gigabit per second throughout the event, with no interruptions or network failures.
Access to very high speed broadband will allow the press to provide real-time media coverage of the inauguration on 6 April by relaying articles, photos and videos at the press conference. For around 4 months, attendees will also benefit from an optimal connection, and make the most of the fibre that is being specially installed for this 12th International Design Biennial.

​​​​​​​More information about the Biennial
Since 1998, the École Régionale des Beaux-arts de Saint-Étienne has been hosting the International Design Biennial in Saint-Étienne. This event has become a fixture in the design calendar. Supported by the city of Saint-Étienne and the Saint-Étienne region, it is attended by designers, researchers, economic players, intellectuals, students, art lovers and curious people from all over the world. With the backing of its public and private partners, the biennials, produced and managed by the Cité du Design, encourage confrontation between the innovations generated by schools, major studios, independent designers, broadcasters, companies and a wide variety of audiences. This 12th event on the theme of the “Bifurcation” will run for 4 months, from April 6 to July 31, 2022, with 7 exhibitions spread over 4,000m² and with over 200,000 visitors expected.